Also see our independent rating of Forex brokers with real reviews by traders.

There are three rules of candlestick analysis, you need to know for every trader:

There are more than 70 Japanese candlestick patterns, but it makes no sense to apply them all. We selected for you the most reliable and the most frequently occurring patterns of candlestick analysis:

1. Inverted likefrom the (weak pattern) and shooting star (strong pattern). These patterns share one candle with a small body and long upper shadow. The difference is that "shooting star" is on top of the market, and the "Inverted hammer" at the bottom of the market. Pattern "shooting star" is stronger because we see that it is at the maximum, the bears were stronger than bulls and it becomes immediately clear where to enter the market and set stop loss. 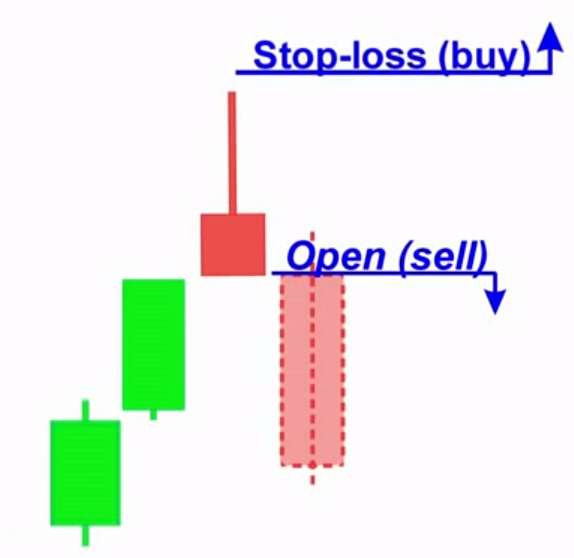 The pattern "Inverted hammer", all very different. It is absolutely identical to the candle, but it is at the bottom of the market, not on top of it, as in the previous example. This pattern shows that in a falling market "bulls" made an attempt to fight back, but the bears were stronger. But what will happen next is not entirely clear. Either price will continue to move down, or the bulls will prevail, and at the break of the high of this candle the trend will change to upward. The probability of a particular outcome is about 50/50, so the pattern is weak. To open a trade we need candle confirmation and then we will decide which direction we will open a trade and where to place your stop loss. 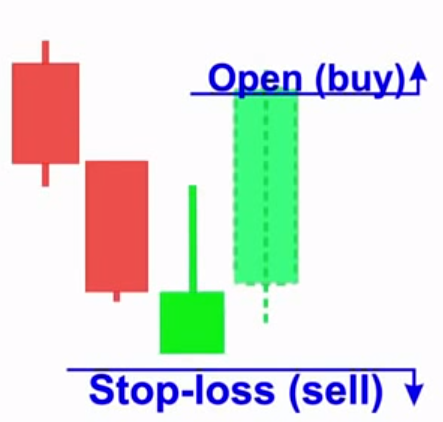 2. Hammer (strong pattern) and the Hanged man (weak pattern). This is the exact opposite of the previous pattern candle with a small body and long lower shadow. There is a strong pattern is "Hammer". He shows us that the market has reached its bottom, and the "bulls" took over "bears". We clearly know where to enter a trade and where to place your stop loss. 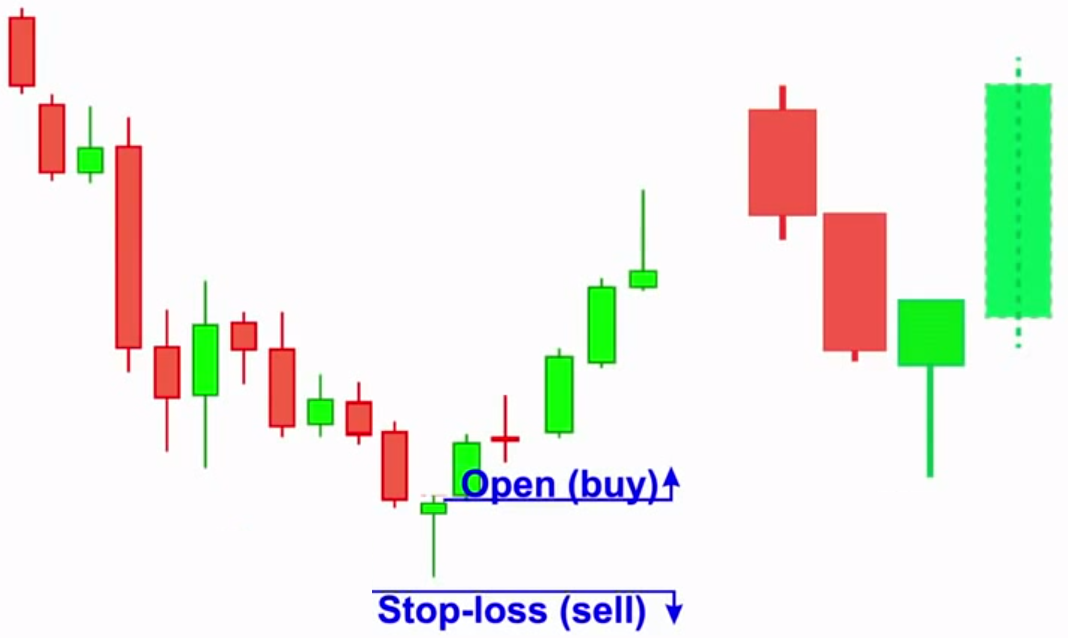 In the case of a pattern "The hanged man" we have to wait for a candlestick confirmation, and if it is a bear candle, then open the deal to sell.

Please note that for the above-described Japanese candlestick patterns is not important the color of the candle. Since the size of the candle body is small, then there is no difference "bullish" it's a candle or bearish. 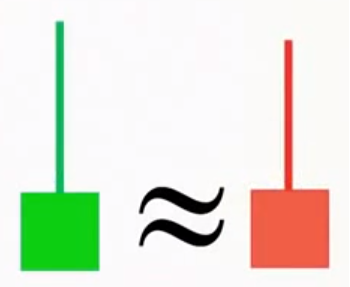 3. Belt hold (strong pattern). It's a candle with a large body and small, almost non-existent shadows. Here the color of the candle plays a crucial role. If that bearish candle at the top of the market, we will open the transaction for sale. 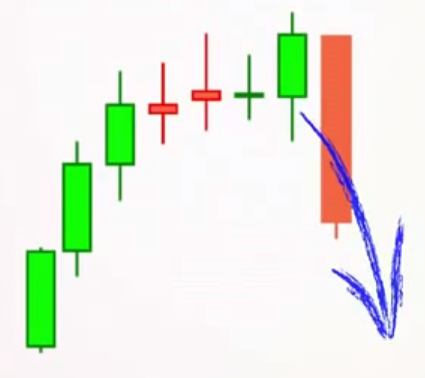 If it is a bullish candle at the bottom of the market, then we will open a buy trade. 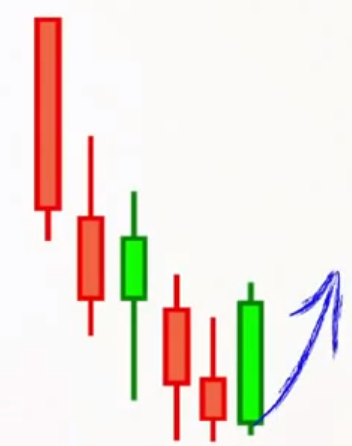 Remember the first rule of candlestick analysis – the larger the candle body and the shorter the shadow, the higher the potential price move in a given direction.

See also what brokers to trade cryptocurrency are considered the most reliable.

1. Absorption (the most reliable pattern). The first candle in this pattern must be slightly more than half of the second candle. In this case the second candle has a pronounced direction of motion and the shortest shadow: 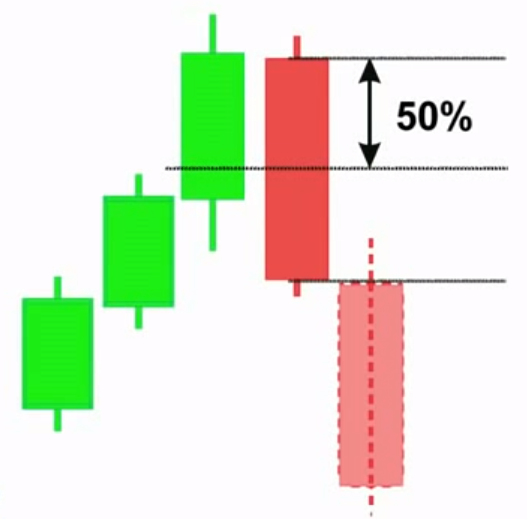 2. The dark cloud cover and piercing. Sometimes it may be dvuhsvetny patterns, similar to Absorption. The only difference is that the opening price of the second candlestick is above the closing price of the first candle in the pattern "Veil of dark clouds" (on top of the market), or below in the pattern of "piercing" (at the bottom of the market). The data patterns can not be called Absorption, because the second candle does not absorb the first, they are almost identical. But, of course, there will be a market reversal, since both of these pattern are very strong; 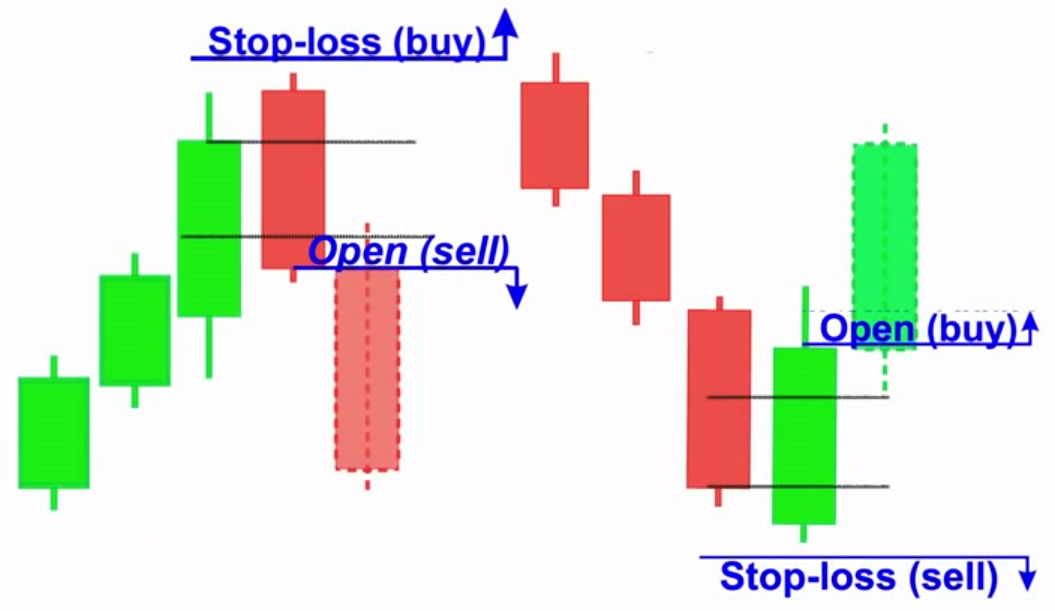 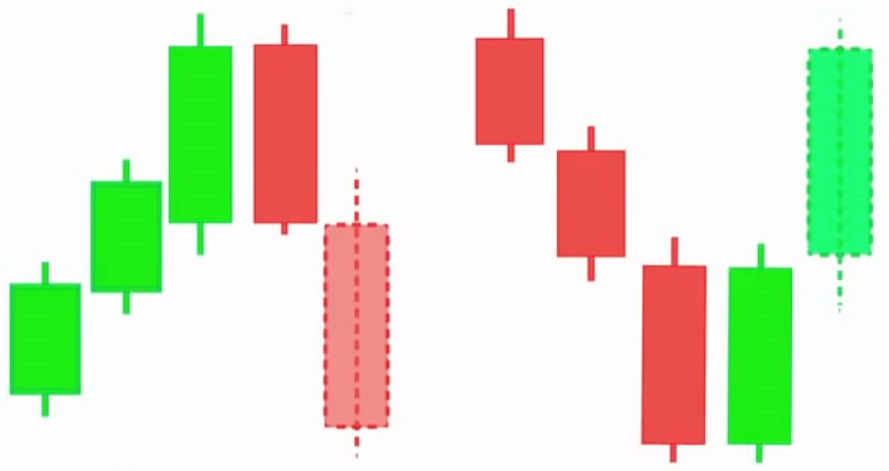 5. Harami (in Japanese means "pregnant"). This is the complete opposite of the engulfing pattern. The first candle of a large size, and the second candle is typically less than half of the first candle.

This is the weakest two-spring model, since we do not know the reason for stopping the price. She turned around and went no further. You must wait for another candle to enter the market. If it is bearish candle, which breaks through the low of the first candle, we open the deal to sell and stop-loss set at the top of the market. If it is a bullish candle that breaks the high of the first candle, we open a buy trade and the stop loss set at the bottom of the market. 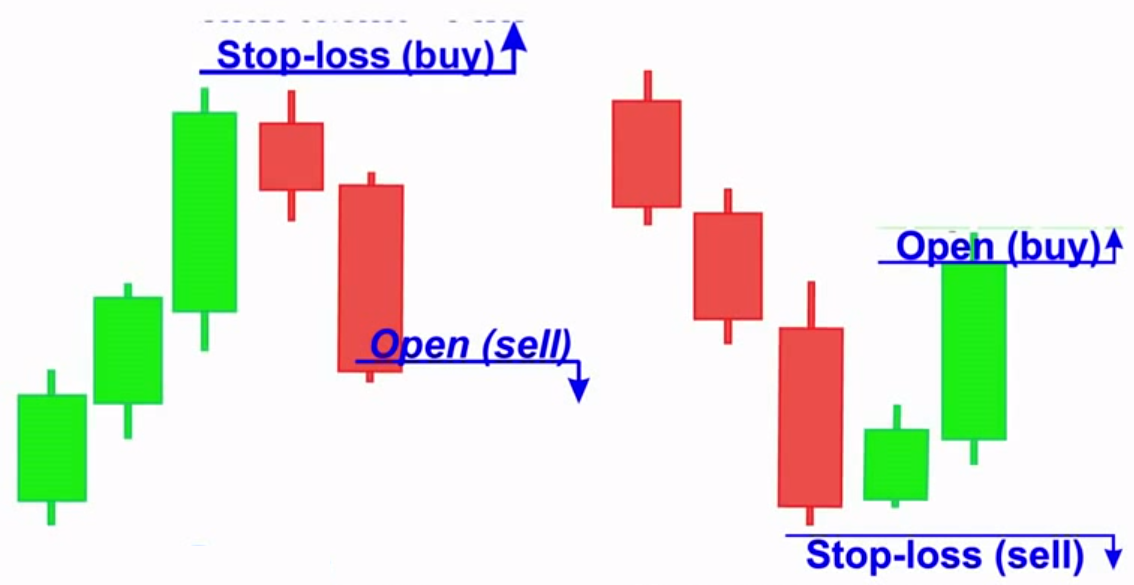 Three-light combinations are rather rare on the chart, but their advantage is that after their formation the price goes far up or down. The three-spring model consists of three candlesticks, and the middle one is usually small. Consider the most popular three-candlestick candlestick models:

1. Star. Bear pattern "Evening star" consists of a single pronounced bullish candle, small medium candle and one "bearish", while the latter closes below the half of the first candle. After the close of the third candle open the deal to sell and set stop loss at the high of the middle candle. 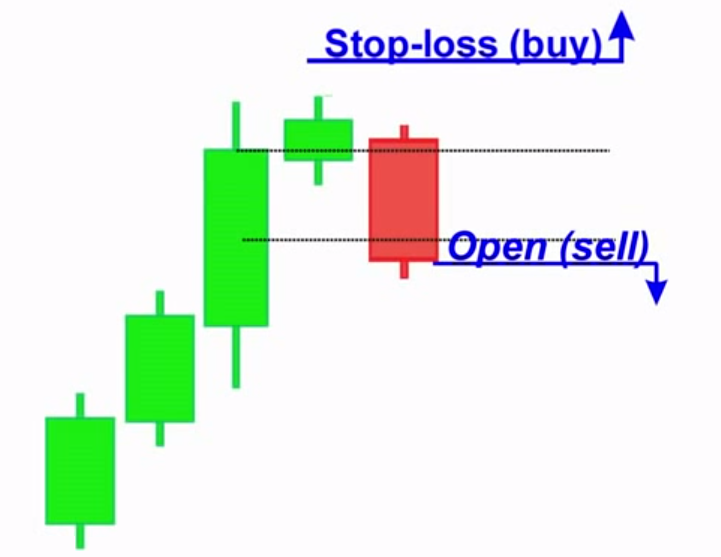 Bullish pattern "Morning star" consists of a single pronounced "bear" candles, small candles and the middle one is bullish, the latter should close above half of the first candle. After the close of the third candle opened a buy trade and set stop loss at the low of the middle candle. 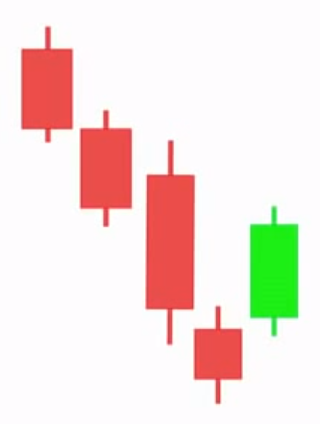 Color mid-candle at the candle model "Star" can be anything.

3. Abandoned baby. Another kind of pattern, "the Three crosses", the exception lies only in the fact that between the first and third shadows, and the shadow of the middle candle is open. This is a very rare but powerful pattern.

See also who are the ECN brokers and what are their advantages in trade.

Multi-core models consist of a large number of candlesticks, sometimes dozens. Consider the most common ones:

1. Three mountains. The price first reaches its maximum, then minimum, and so until, until the formation of three "mountains", and then the price breaks the base of the mountains, and you can open a sell deal;

2. The three vertices. Sometimes it may happen that each top of the mountain a little higher than the previous. Traders call this model the "Three peaks"; 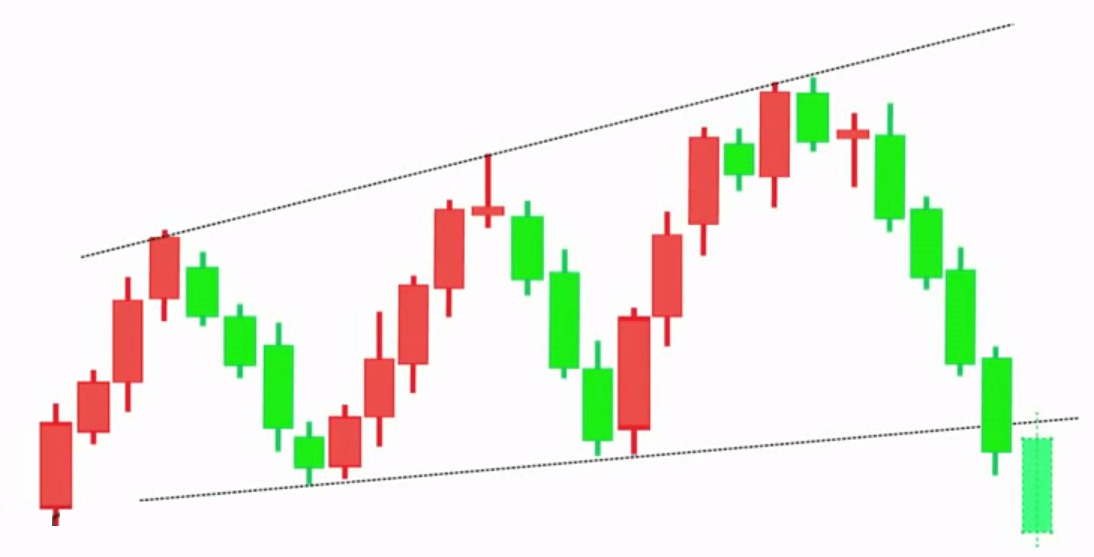 3. Three riversI. This is the opposite model of the pattern of "Three mountains", are formed when three of the bottom, followed by the break up;

4. The three valleys. This is the opposite model of a pattern "Three peaks", where each subsequent below the previous low; 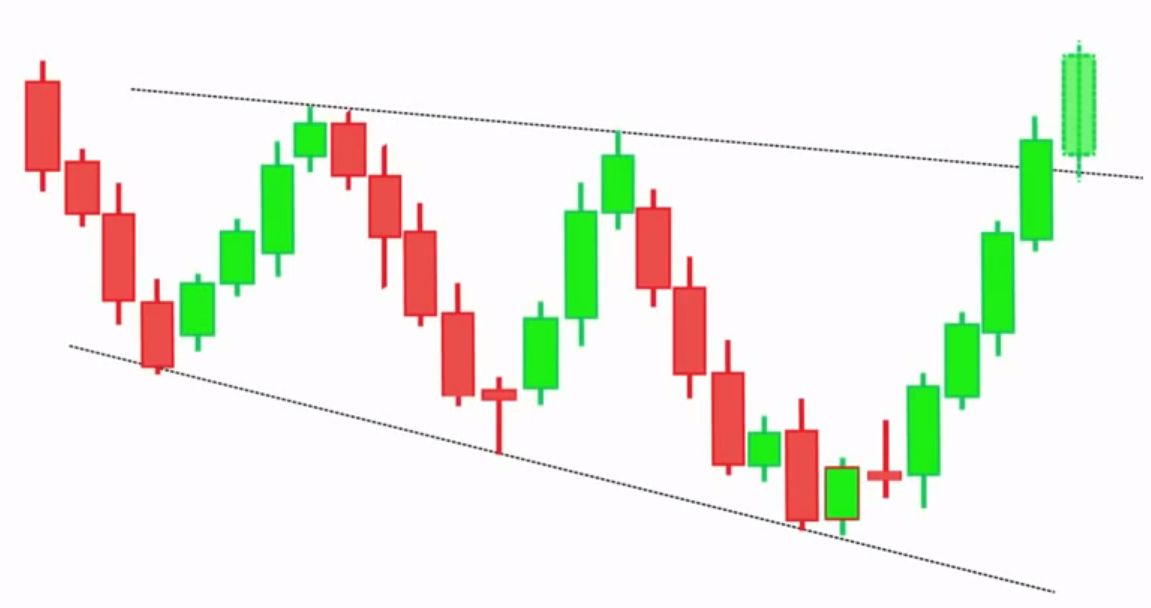 5. Three Buddha. This is a situation where one high above the rest on top of the market, or at least one below the other on the bottom of the market.

See also what brokers for scalping are the best.

Read also the article "Trading Strategy on the levels of support and resistance".