What is GameFi? How does GameFi work? How can I earn money in GameFi games? What are the blockchain games?

Increasingly, we are faced with games on the blockchain. This is not surprising, because games have always been interesting, and the global gaming industry now amounts to more than 175 billion dollars. You may have heard of games like Decentraland or Axie Infinity, which accounts for more than $1 billion in digital asset sales.

All of this falls under GameFi. In this article we will explain what GameFi is and which games are popular in this industry. We will also take a closer look at the "play to earn" principle, which is used in the GameFi world.

Do you want to earn money by changing the rates of cryptocurrencies? We recommend opening an account on Binance – the best cryptocurrency exchange in the world. 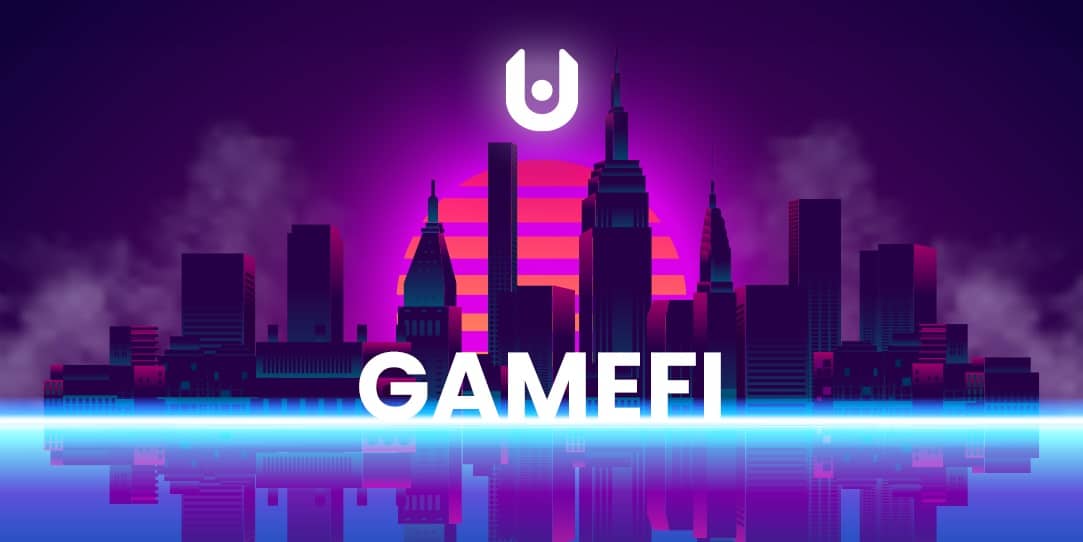 GameFi means "game" and "finance". Consequently, GameFi is closely related to DeFi. Like DeFi, gaming applications are managed in a decentralized manner. This means that the games run on the blockchain. However, GameFi is not a standard game. GameFi uses the principle of "play to earn". This means that users have to play the game to earn money. For example, they can earn special items in the form of NFT. This ensures that the items are unique and can bring in a lot of money if the user decides to sell these items.

How did GameFi come about?

In November 2019, the first GameFi game called MixMarvel appeared, which was mainly played in China. It wasn't until Andre Cronje, the founder of Yearn.Finance, tweeted about GameFi in September 2020 that the concept became known in the Western world. Since then, we have been using GameFi games where players can earn money.

How does GameFi work?

It is important that the blockchain supports smart contracts. Only after that, developers will be able to develop a game that can run on this blockchain. Ethereum was the first blockchain to offer this capability, so most games currently still use this blockchain.

Although Ethereum is the most widely used platform for DeFi, this does not mean that it is the best platform, since transaction costs are very high (sometimes several hundred dollars) and transaction processing takes a very long time. Fortunately, there are many other blockchains on which developers can run their games:

How can I earn money in GameFi games?

In some games, players earn money by completing certain tasks. In many cases, players receive their own tokens from the game, but it can also happen that players earn NFT. These rewards are stored in a smart contract. That's why it's important that the blockchain provides support for smart contracts before it can be used for GameFi.

A well-known GameFi game is Axie Infinity. Here, users can earn AXS tokens by winning matches against other players and trading on the Axie trading platform. 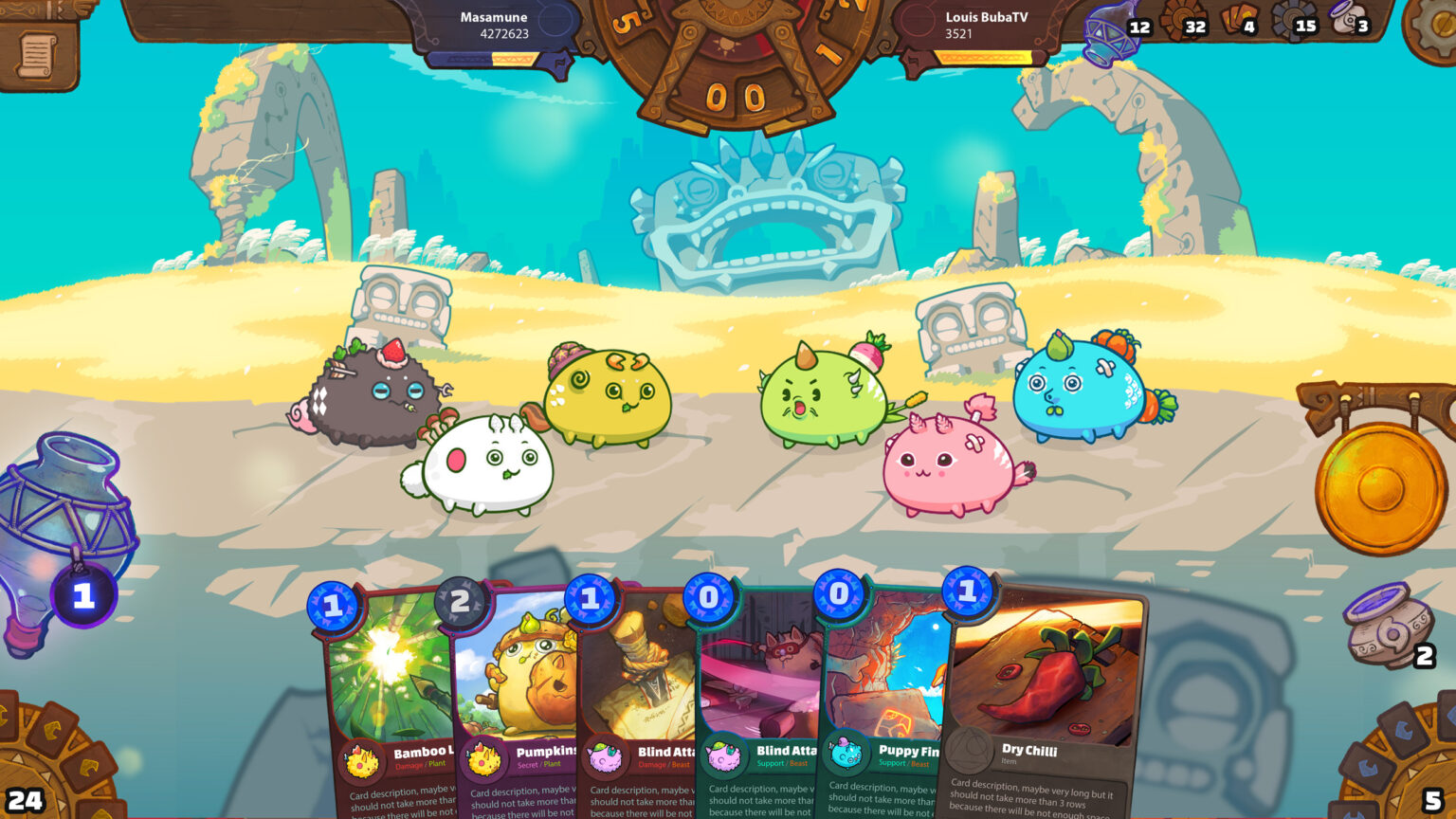 Axie Infinity is a game that mIt is difficult to compare with Pokémon or CryptoKitties. It revolves around breeding Axies with a unique set of skills and abilities. To start your journey through the Axie universe, you must have a team of at least 3 Axies. Currently, the minimum price for the manufacture of 3 Axies is about $ 800.

Players have the option to upgrade their Axies in Adventure mode. They can then receive rewards for each completed mission.

On the other hand, Axie owners can also test them in arena mode (PVP), where players fight other players. Each victory in the arena mode not only improves your rating, but can also bring you a number of rewards depending on your rating.

All items won in the game can be sold. For example, players can receive rewards in the form of Smooth Love Potion (SLP) tokens. Axie Infinity has collected more than $150 million in commissions in recent months. This income is redistributed between players, which explains the success of the game. 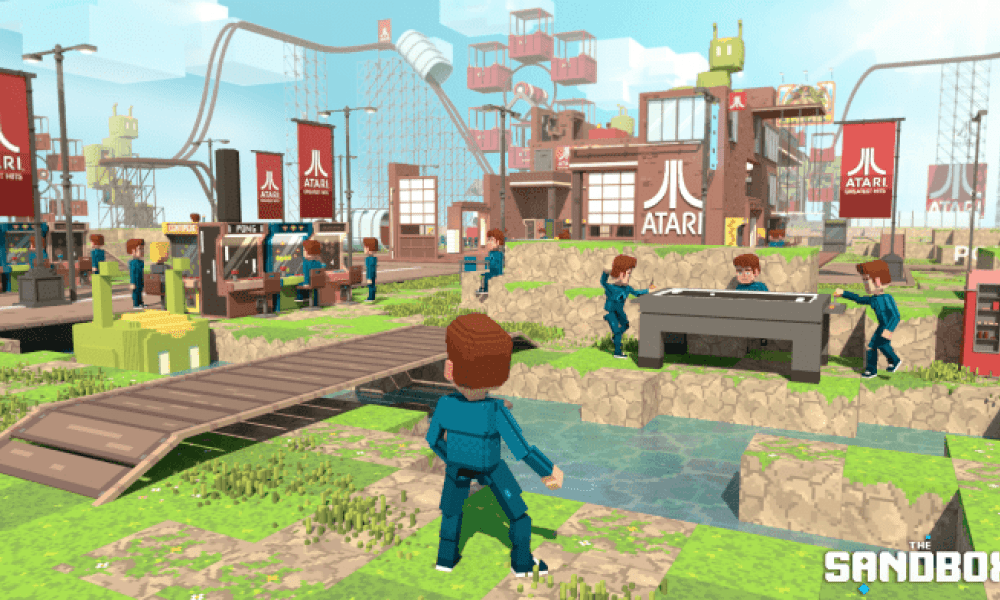 The Sandbox is a game founded in 2011 by Frenchmen Arthur Madrid and Sebastian Borge, it is a virtual world in which developers can create and monetize games on the Ethereum blockchain using NFT and a cryptocurrency called Sand.

The platform currently offers a set of tools for creating games without code, which developers can place in one of the 166464 sections of The Sandbox virtual space. The tools include solutions for creating three-dimensional animated objects, NFT and a trading platform for trading. A 5% commission is charged on all transactions. Cryptocurrency wallets of more than 500,000 users are connected to the platform.

NFTs are also used as title deeds for parcels of land in this virtual universe, which must be purchased in the same way that one buys land before building on it. These parcels of land can be located on a virtual map on which players can launch their avatars. Two-thirds of these plots have been sold to date for a total of more than $ 144 million.

The Sandbox can be seen as a convergence of Minecraft, Roblox, Second Life and user content around blockchain technology. We are not talking about the metaverse in the sense that Mark Zuckerberg understands it, using virtual reality headsets. On the other hand, there is a real connection between NFT and virtual worlds with a metaverse. 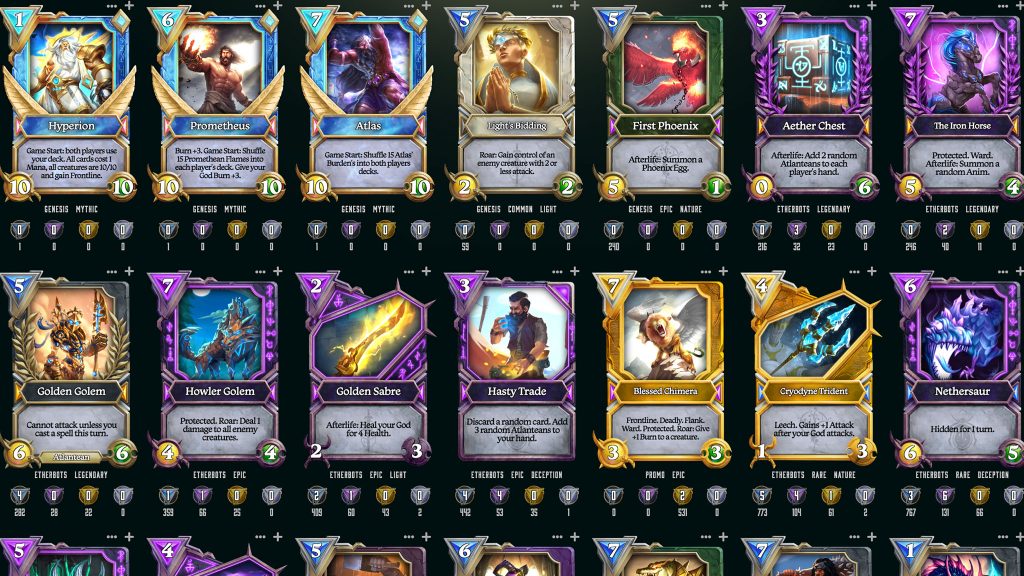 Gods Unchained is a card game similar to Hearthstone in which you compete against each other and win cards. Each card is an NFT with its own features.

Gods Unchained was created in collaboration with Nine Realms, and GODS is an ERC-20 token for the Gods Unchained universe. Players can use GODS to create NFTs, buy kits on the Gods Unchained marketplace, and earn even more rewards by placing tokens on the marketplace. GODS tokens also represent the right to vote, allowing players to participate in management proposals that affect the fate of the game. 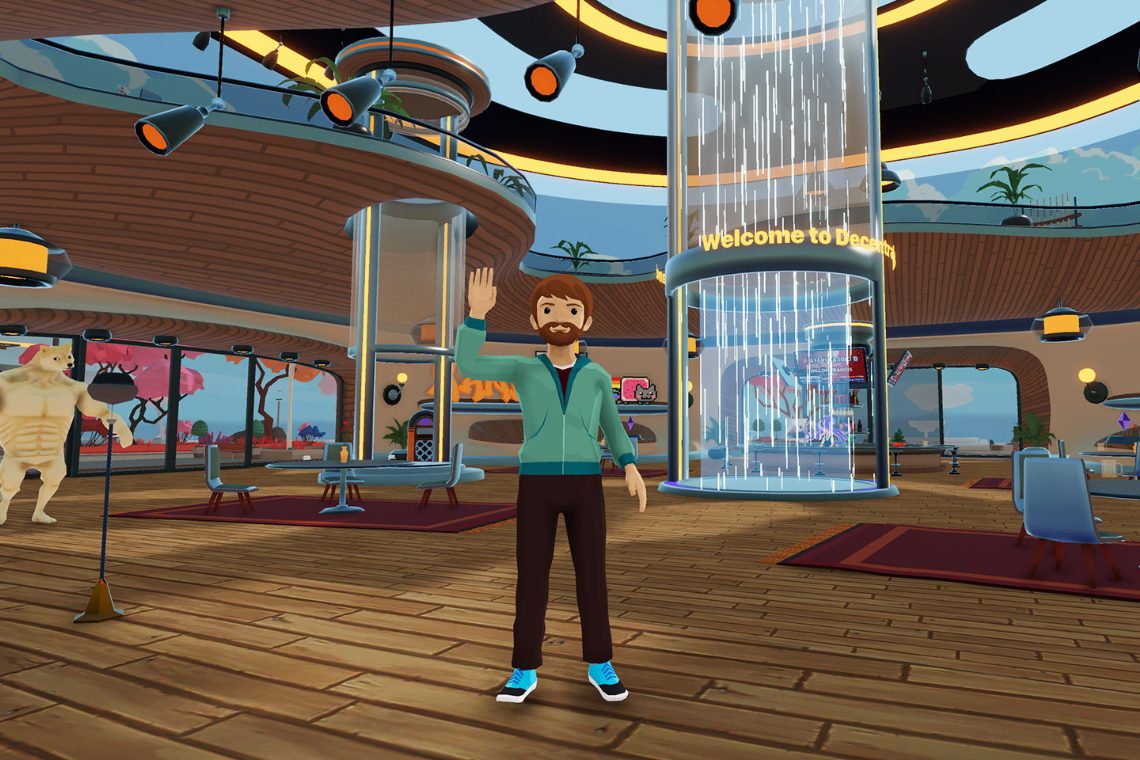 Decentraland is a virtual reality platform built on the Ethereum blockchain. Like Minecraft, Second Life, or The Sandbox, Decentraland has no particular purpose. Instead, users travel around the virtual world buying plots of land that are stored as NFT and on which they can earn money. Land plots are purchased for MANA, ERC-20 Decentraland's own token. With Decentraland, you can build anything on your plots of land.

Decentraland not only provides a digital virtual reality environment, but is also hosted on decentralized Ethereum servers. The world is also mapped using BitTorrent and Kademlia DHT networks, making it a combination of blockchain and P2P torrent technology. 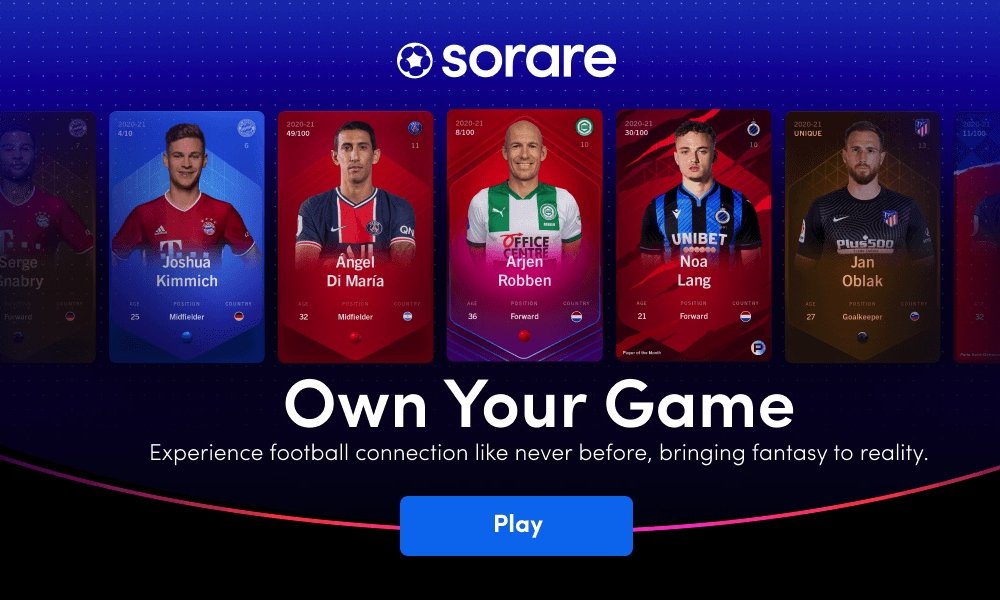 Created on the basis of the model of the famous Panini cards with the image of football players, Sorare allows users to collect them and speculate on the rarest and most sought-after copies. By registering on Sorare, players receive virtual cards from players. They can then be used to create one or more virtual football teams of five players who also play in different virtual leagues.

The player's results will depend on the performance of real players in real football matches. If a player with one of the cards scores a goal in real life, the card becomes more valuable. Each player is rated on a scale from 0 to 100, calculated by an algorithm based on Opta data. This company specializes in football statistics. Therefore, the player must choose his virtual players wisely, taking into account their current form or any injury.

The cards are classified according to different the rarity scale, the most valuable of which is the "unique" category, which means that there will be only one card per player and per season. So the lucky owner can expect to sell it on the market for several thousand dollars. For example, Cristiano Ronaldo's card was sold for $280,000.

In addition, there are "super rare" cards that are produced digitally in the amount of 10 copies per player per season, rare" (100 copies) and "limited" (1000 copies). For example, Lionel Messi's "limited" card was sold to PSG for 11,000 euros. Sorare users can also buy or sell their cards among themselves through a special trading platform.

The gaming industry is growing very fast. This happened even before we heard about blockchains. However, it is gaining momentum, since it is also possible to play games on the blockchain. Many of these types of games allow players to earn money by playing the game. These games belong to GameFi.

GameFi is an important part of DeFi and the metaverse, which have become very popular in recent years. Currently, there are many games in which players can earn money. For example, Axie Infinity, Sorare, Decentraland and The Sandbox. So you can really get rich by playing games like this.

Read also the article "Web 3.0 - the decentralized network of the future".