What are Forex Graphic Patterns?

What are graphic patterns? What are the types of graphic patterns? How to find reversal patterns (double top, double bottom, head and shoulders, rising and falling wedge) and trend continuation patterns (flags, pennants, rectangles and triangles) on the chart?

If you have not yet chosen a broker or want to change a brokerage company to a reliable one, we recommend that you look at our rating of Forex brokers and read the reviews of traders.

What are graphic patterns? 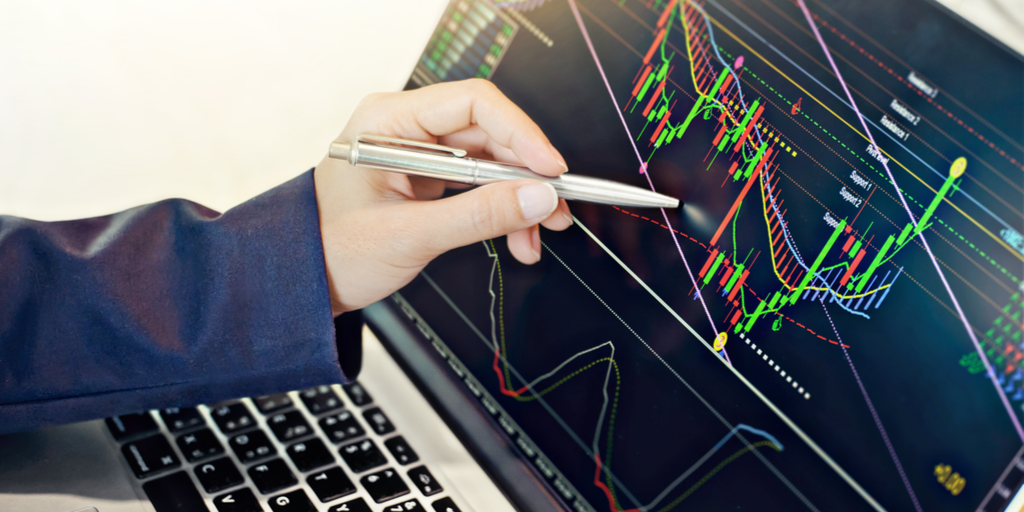 Graphical analysis models show the state of the market and help traders assess whether the trend will continue or reverse.

Millions of players trade on the financial markets every day. These are professional traders, investment companies, retail traders and investors. Mark Douglas in the book "Trading in the zone" says that all people have behavioral patterns. A group of people who interact with each other (for example, on the stock exchange), together form collective behaviors.

In other words, people act on the basis of their past in a similar and predictable way in the future. History doesn't always repeat itself, but it often rhymes. That's why we have to think in broader patterns, because patterns repeat more easily than individual events.

You can also extend this philosophy to price charts, where transitions between uptrends and downtrends are often indicated by recognizable price movements. These price movements form graphical models that repeat with a certain regularity.

Forex charts provide us with the perfect environment to look for these patterns as charts are a visual representation of all buying and selling activity.

There are two types of graphic patterns:

It is important to note that some graphical patterns can signal both a continuation of the trend and a reversal, depending on the circumstances.

See also what brokers there are with a low spread.

In this section, we will look at reversal patterns that you can use to determine the moment of a trend reversal and enter a trade at its very beginning.

Let's start with the simplest, most common and one of the most effective patterns – the "Double Top", which occurs at the end of an uptrend.

This pattern is formed as follows:

As soon as the price closes below this level, the pattern will end and become a signal to the end of the uptrend.

The "Double Bottom" pattern is the exact opposite of the "Double Top". It occurs at the end of a downtrend and signals a possible switch to an uptrend.

Stages of formation of the "Double bottom" pattern:

As soon as the price closes above this level, the pattern will end and become a signal for the end of the downtrend.

This pattern can be found at the end of an uptrend. As soon as it forms, there is a high probability that a new downtrend will begin.

Why this graphic pattern is called "Head and Shoulders" is clearly seen in the picture below. 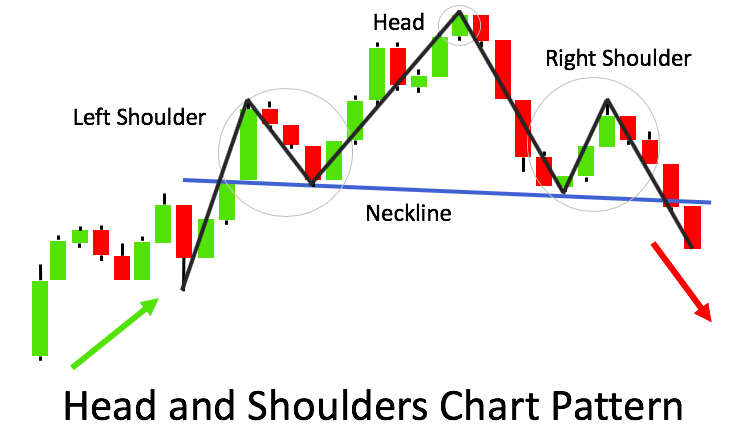 Here is an explanation of the "Head and shoulders" pattern:

This graphic pattern is a bullish version of the "Head and Shoulders". You can find this pattern at the end of a downtrend, and it signals a possible trend reversal from bearish to bullish. 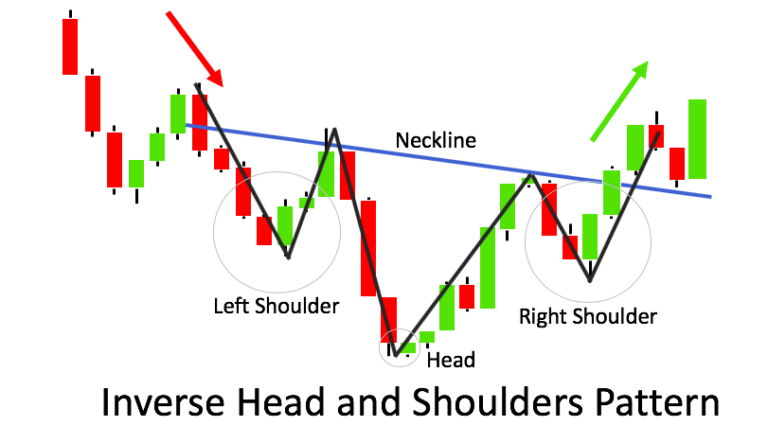 The "Inverted head and shoulders" pattern is formed as follows:

The "Rising Wedge" pattern is formed when the price makes higher highs and higher lows within a narrowing range that moves up. 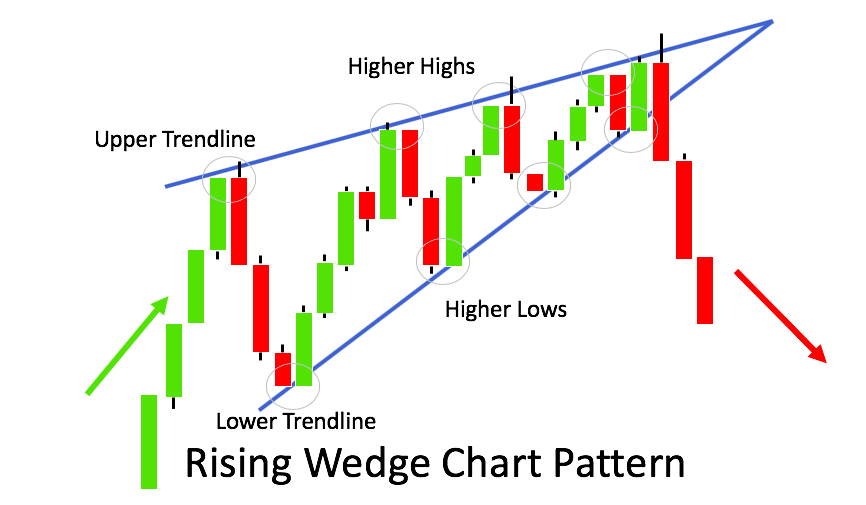 For this graphical pattern, it is important that all the highs and lows are well aligned so that they can be connected to the trend line. It is clearly seen that the lower trend line is steeper than the upper one.

When the price breaks the bottom, it means the end of the uptrend and is a good sign of switching to a downtrend.

A "Falling wedge" is an inverted pattern of an "Rising Wedge". Falling wedge formirit occurs when the price makes lower highs and lower lows within a narrowing range going down. 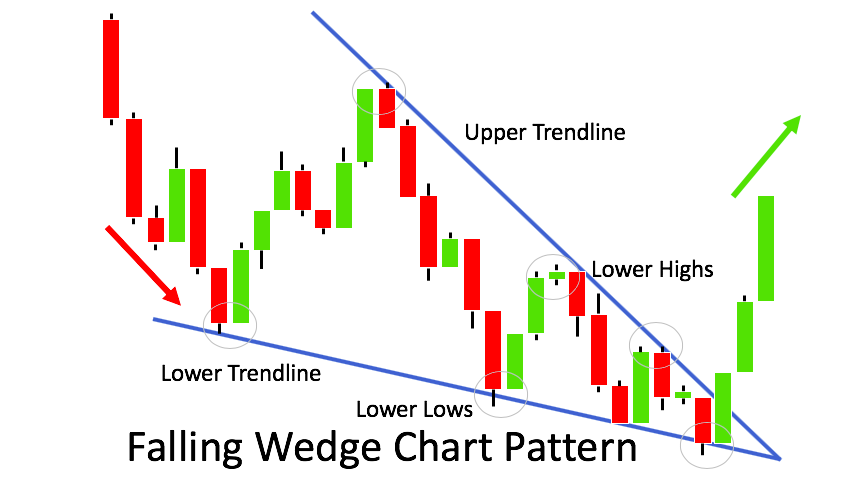 As the price falls into the "Falling Wedge", the trend lines get closer and closer until they touch. When the bears fail to set a new low, the downtrend ends and a new uptrend begins. At this time, traders may be looking for a good buying opportunity.

In this section, we will consider the graphical patterns of trend continuation.

Flag models are very common and often cause explosive movements. In addition, they are easy to spot. 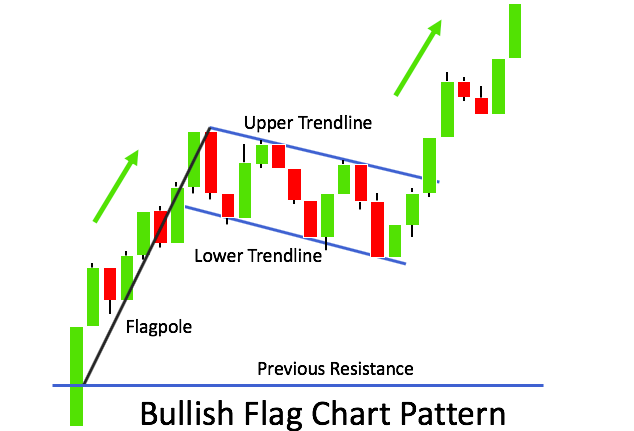 Explanation of the "Bull Flag" pattern:

The "Bear flag" pattern is the exact opposite of the "Bull Flag". 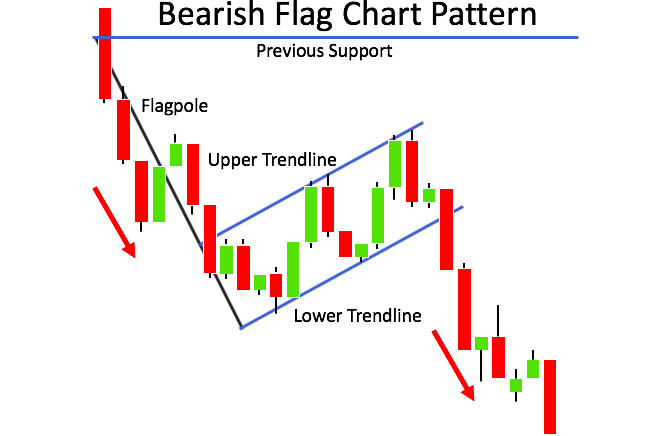 Explanation of the "Bear Flag" pattern:

Pennant patterns are very similar in structure to flags. Some sites don't even distinguish between them. What is the difference between pennants and flags?

The consolidation phase, which we know as the flag, is less intense for the Bullish Pennant pattern. Bears have much more problems with containing the uptrend. This makes it impossible to get lower minimums, as with flags. 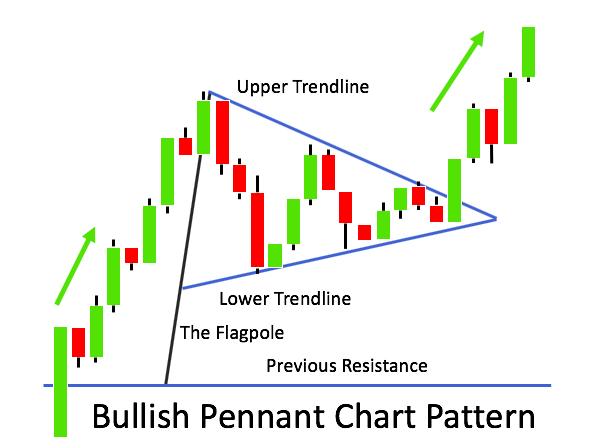 In other words, the Bullish Pennant pattern tells us that buyers are stronger than sellers during consolidation. The rules are similar to the rules of the "Flag" pattern.

After a sharp downward movement that broke through the support, the price consolidates in a narrowing range resembling a triangular flag (pennant). 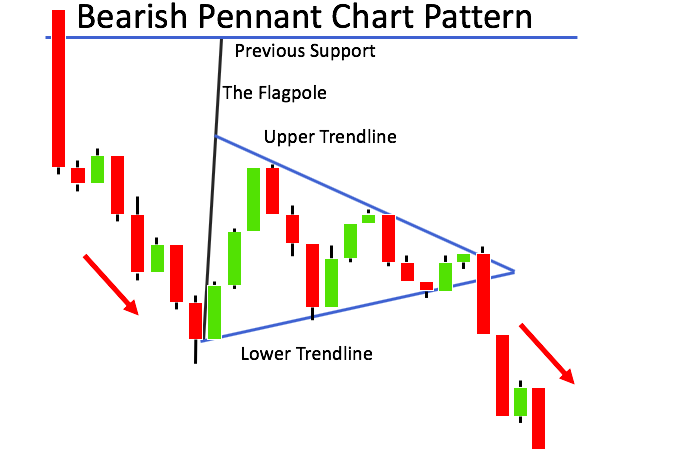 However, this is a relatively short period of consolidation before the price breaks the bottom. Thus, the Bearish Pennant pattern is completed, and you can look for an entry to continue the downtrend.

The ascending triangle pattern is usually bullish. You can find this pattern during a consolidation period during an uptrend. 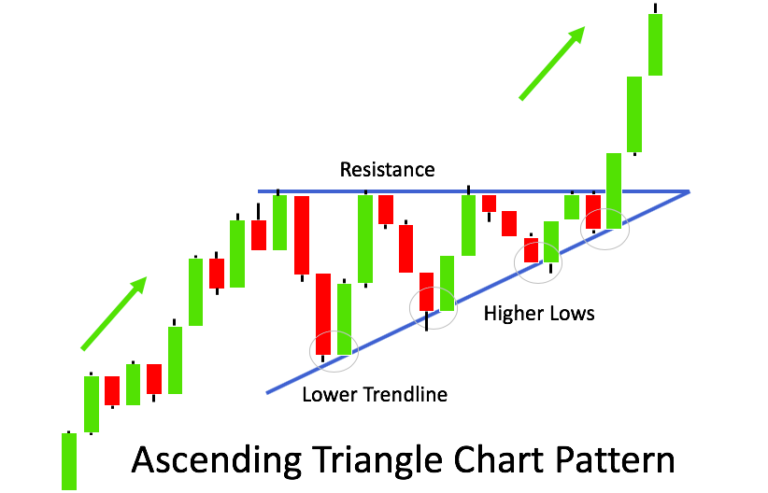 The price makes higher lows, which we can connect with the trend line at the bottom, but buyers cannot break through the resistance above it.

You would say that the uptrend is probably over, but if you look closely, you will see that the price action is shrinking againit's crumpled. Buyers are gaining strength, and sellers are slowly running out of steam.

In the end, the price breaks through the top of the ascending triangle, which often causes a significant movement. A breakout completes the figure and signals the possibility of buying.

The descending triangle is bearish, telling us that the downtrend is likely to continue. 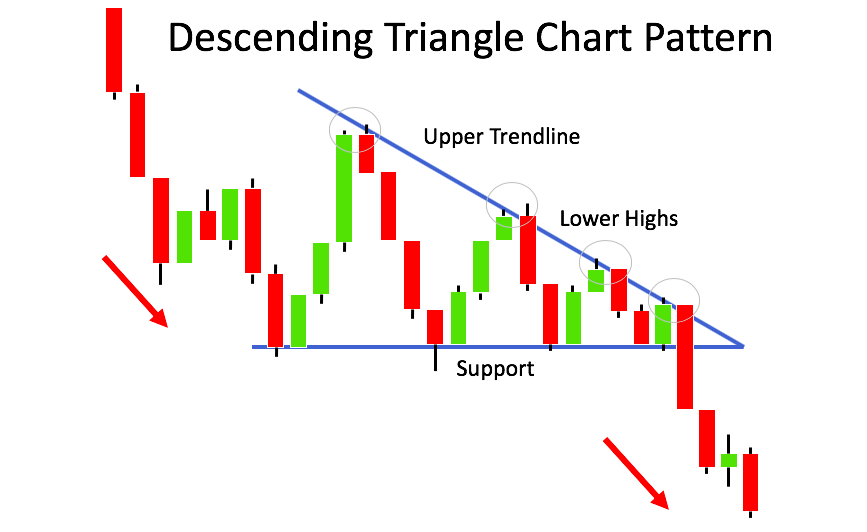 This pattern can be recognized by the horizontal bottom, where the price has met strong support. At the top you can see a descending trend line connecting the lower highs.

The breakdown completes the "Descending Triangle" pattern, and at this moment we can look for an entry into a short position.

Rectangles are the simplest shapes that can be found on the graph. 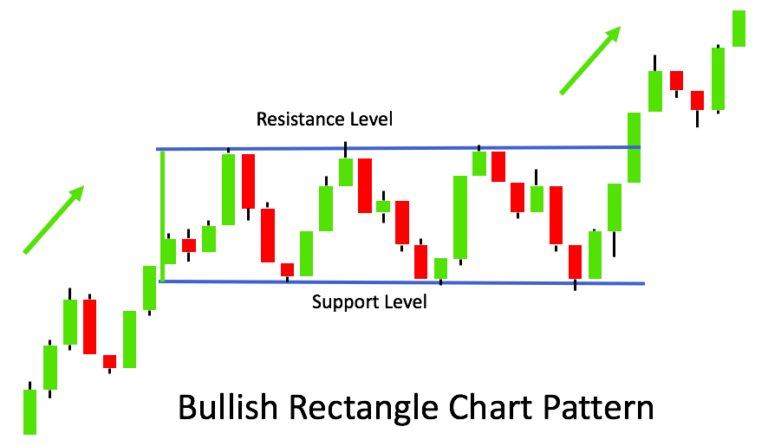 In fact, a "bullish rectangle" is nothing more than an uptrend range, which is usually formed on or just before a strong resistance. For a certain period of time, bulls and bears are equal.

This creates a range around which you can draw a rectangle. The lower part of the rectangle is the support, and the upper part is the resistance.

As soon as buyers take control, the price will break up, and we can open long positions.

The "Bearish rectangle" pattern looks the same, but it takes place in a downtrende, so the effects are reversed. 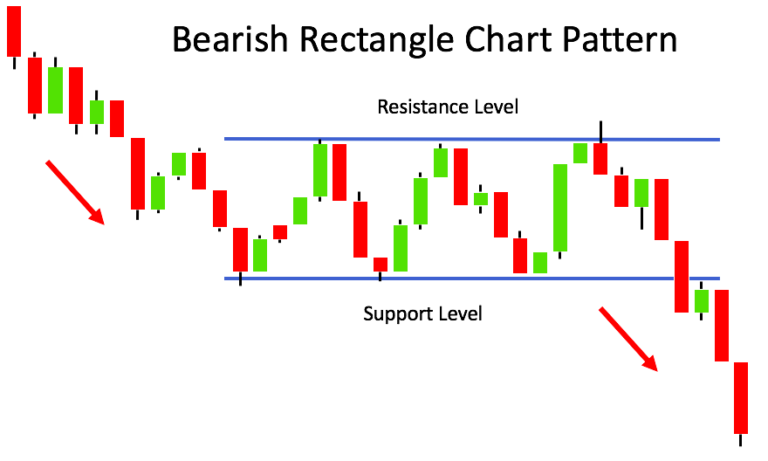 Please note that rectangles are typical examples of graphical patterns that can work both for a reversal and for the continuation of a trend.

Fortunately, there are several periods of consolidation and only one reversal inside the trend, so rectangles are more often a continuation of the trend than reversals.

The main disadvantage of graphical patterns is that they need to be searched on the chart. It's not very difficult, but you need practice. It is best to do this on history, then practice on a demo account, and only then switch to real trading. For some traders, when searching for graphical patterns, the transition from a candlestick to a linear chart helps.

Among the advantages, graphical patterns are a reliable signal for entering trades, they do not lag like indicators, and with their help you can easily determine the goals of take profit (for example, the height of the figure) and stop loss levels (the opposite level of the pattern).