The metaverse was one of the most popular topics of the cryptocurrency community in 2023, especially after Mark Zuckerberg changed the name of the Facebook company to Meta. Meta alone will invest billions in the metaverse. Would you like to walk around the metaverse with an avatar of yourself? MetaHero will make this possible.

In this article, we will talk about the ambitious MetaHero project and the HERO token. You will learn what MetaHero is and how it works. We will also get acquainted with the project team and tell you where to buy a HERO token.

Don't know where to trade cryptocurrencies? Choose Binance – the most reliable and popular exchange in the world.

MetaHero calls itself the gateway to the metaverse. They want to introduce the next 10 million people to the cryptocurrency world with the help of new generation 3D technologies. They do it together with Wolf Digital World (WDW) or Wolf Studios. Wolf Studios has the technological know-how to capture the details of our physical world and transfer them to the digital world.

The goal of MetaHero is to create a scanned copy of yourself and other objects in ultra-high HD quality from the physical world and move them to the metaverse. They want to do this with the help of modern scanners in the form of rooms that are located in different places around the world. First of all, these will be places where there is a strong culture of games and technology. The first of the 3D scanners was installed in Dubai (UAE) in October 2023 during the Future Blockchain Summit event. In 2023, a total of 3 rooms will be installed.

Now you can take your favorite pet or clothes with you to the metaverse. Make sure you have enough HERO tokens to pay for the scan. Prices are up to $ 700 for a custom scan. Then you can go to one of the places in the world where there is a 3D room, and within a few seconds a scan consisting of several thousand photos will be performed. The big news is that MetaHero will also pay people to scan.

The following image shows the current members of the metaverse. 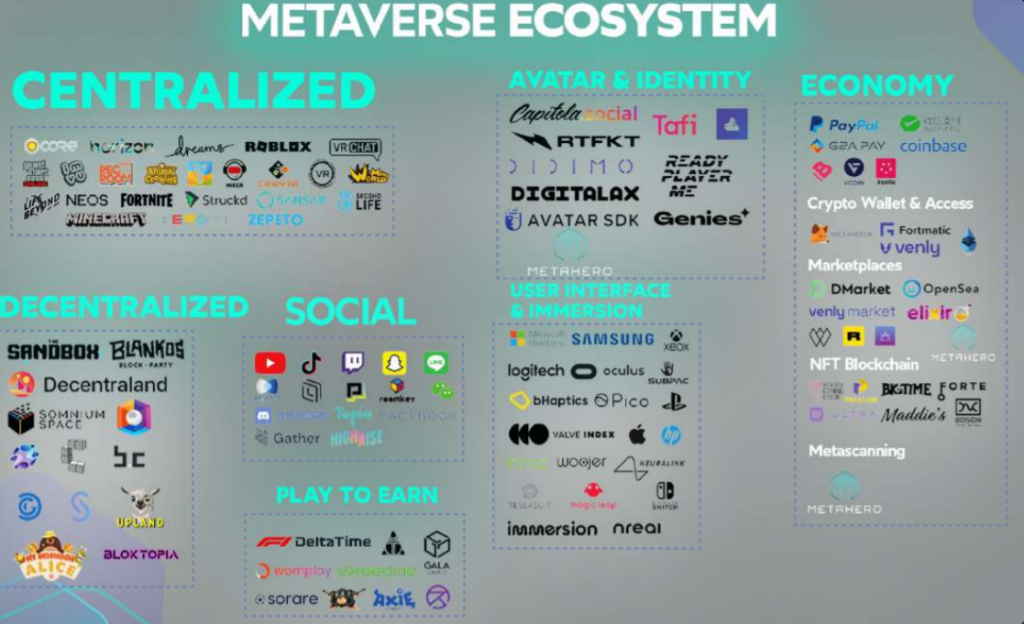 See also what GameFi is.

How does MetaHero work?

MetaHero works with various components, of which the 3D scanner is one of the most important.

Different copies of these 3D scanners are installed in different locations around the world. In this scanner, you can create avatars that are used in the metaverse. In addition to being able to pay for a scan, with all the items you want to transfer to the metaverse, people will also be invited to scan. Instead of paying with a HERO token, you can even get a HERO when you are invited to scan.

MetaHero is also interested in scanning people and objects, which allows them to create a catalog. They also want to develop and use their technologies for medical purposes. If you are invited to scan yourself, they will pay $1,000 for it. The costs are paid by partners who can use the scanned images to develop their own games. This applies to 100,000 people in 2023 who will be scanned and paid for it.

Therefore, the next three places where a 3D scanner will be installed in 2023 will be chosen with special care, but there is no doubt that one of them will be in Dubai.

Below you can watch a video showing how MetaHero works.

Scanning of art objects in 3D NFT will be performed in a similar way. You pay for the scanned object using HERO cryptocurrency. Here MetaHero can also search for images to scan and pay for them.

You can register on the Wolf Digital World marketplace, which is an interface for everything related to 3D. After registration, you will receive a notification if the scanner is near you. WDW has an impressive list of companies they have worked with, such as Disney, Heineken, Volkswagen, Shell, Ferrari and Toyota. They have also already completed several 3D projects.

The following image shows the characteristics of 3D rooms.

For example, there are 200 Sony A7RIVA cameras located on 20 columns supporting the room, that is, 10 per column. The result is insanely beautiful, with very high resolution. There is also a radio-controlled camera launch system. All devices are connected together, which ensures that the delay between the input and output signals is only - 2 microseconds or 0.00002 seconds. The photos were taken with a shutter speed of 1/80 – 1/160, and will be ready in 15-40 minutes.

This is only a small part of the general list of technical characteristics of a 3D room, but it is very impressive.

In the meantime, they already have V3 rooms, which have the following advantages over the first generation:

The HERO app will play an important role and is being developed in stages. The first version has already been released and serves to track the statistics of your HERO tokens. The next steps are to integrate WDW and get a single place in the HERO app to track all your investments and make full use of the ecosystem.

There is also a HERO exchange plan that will allow you to buy HERO tokens directly through the app. This will provide a low barrier to entry and greater token recognition. A VISA card will also be added so that the app can be used to pay expenses with HERO in everyday life.

The application should become an entry point into the entire MetaHero ecosystem. At the same time, it is a one-stop shop for everything related to the HERO token.

Below is an image of a 3D scanner. 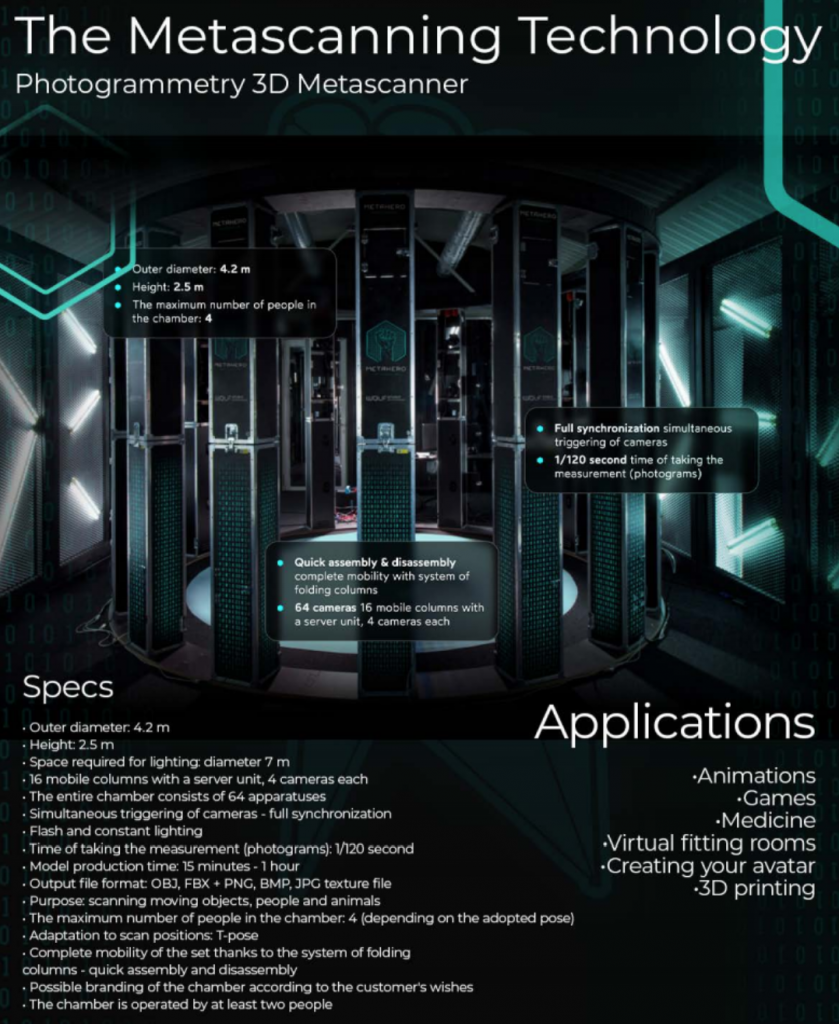 Who is part of the MetaHero team?

See also what smart contracts are.

What is a HERO token?

The HERO token is currently a service token. They are paid everything in the HERO ecosystem. Scanning, licensing or selling NFT - everything is paid for and processed through HERO.

Founder Robert Green was the first to invest $10 million in the project. After that, there were private and public sales, starting with PancakeSwap. Now KuCoin is one of the official partners of MetaHero.

The image below shows the distribution of tokens. 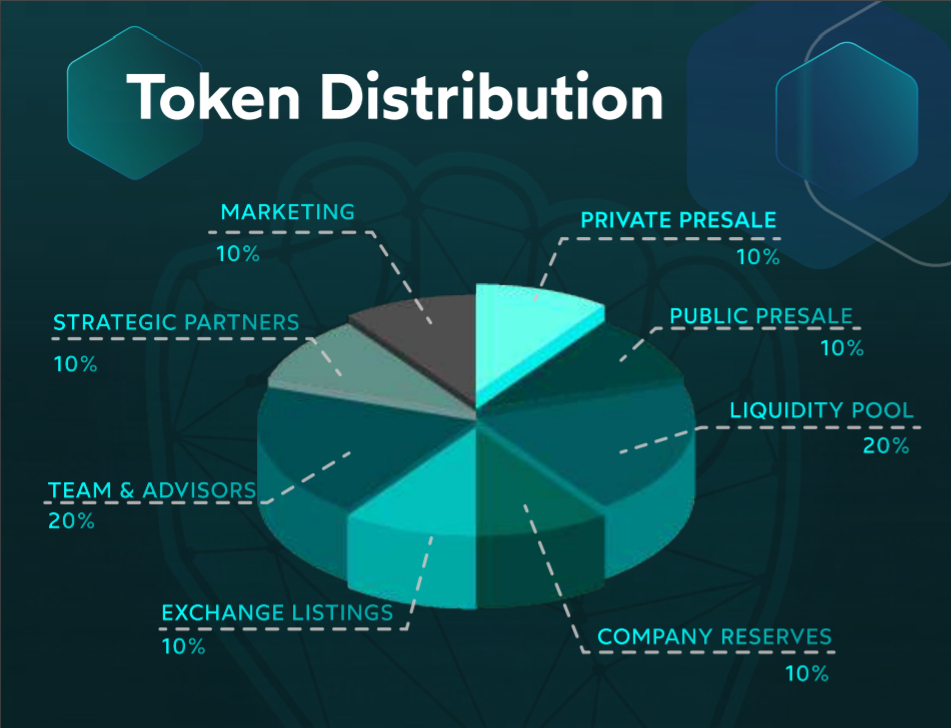 The following image shows the distribution and unlocking of tokens.

What is the price of HERO? 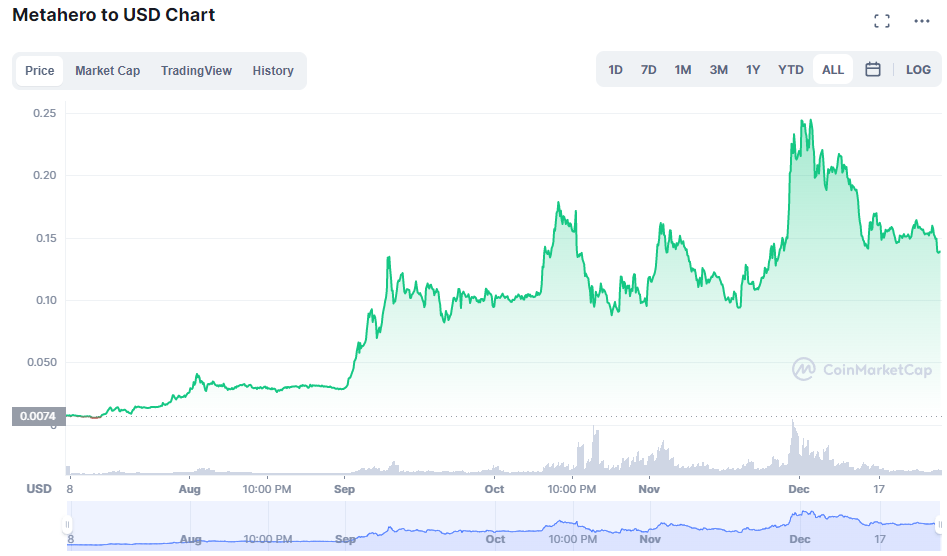 On CoinMarketCap, the HERO cryptocurrency is on the 226th place. This coin has good prospects, especially when three 3D scanners will be installed in 2023 and people will be invited to scan for $ 1,000. The HERO token can thus experience good price dynamics.

Where to buy MetaHero?

The HERO token is not yet for sale on Binance. Two leading CEX exchanges are already offering this coin: Gate.io and KuCoin. There are also several liquidity pools on DEX, such as PancakeSwap, where you can find the HERO token.

The following video gives a good explanation of how to buy a HERO token on PancakeSwap.

What is the best way to store the HERO token?

You have several options for storing these tokens. The safest way is to store them in a hardware wallet, also known as a cold wallet, such as Ledger X and Trezor. Of course, you can leave your HERO token on the exchange. These wallets on the exchange are also called hot wallets. However, there is always a danger of hacking the exchange, and then you have a chance to lose your coins.

As a third option, you can also use an online wallet such as MetaMask or Binance Chain wallet. There is still a chance of hacking such a wallet, but it is much less than hacking the exchange.

There are many different projects related to the metaverse, but there is practically none that also includes 3D scanning. By building a bridge between the physical and digital world, they show that you can also play a role in the future digital world of the metaverse. MetaHero creates something completely unique. They will do this with the help of virtual VR/AR glasses, blockchain technology, cloud servers and 3D scanning technology. The plan is ambitious, but it has a good chance of success. The first 3D scanning room is already in Dubai, and two more rooms will be added in 2023.

In addition, MetaHero pays people to scan. This will have a positive effect on the HERO token. It's still pretty cheap at the moment, but in the futurem everything can change. The metaverse will grow, and MetaHero can play an important role in its development.

Also read the article "7 ways to make money on cryptocurrency".