For those who have not yet decided on the choice of broker, see our independent Forex brokers rating with real reviews traders.

What is a moving average?

The moving average is a lagging indicator that smoothes past price values ​​for N candles (where N is the moving average period) and filters out market noise. He does not predict the trend. Instead, it simply determines the current trend.

Why is this important?

But the attractive part is that you can determine a trend from a wide range of average values ​​depending on the period of the moving average, for example, SMA 100, SMA 200, EMA 20 or any other value.

In addition, when it comes to determining a trend with the help of a moving average, you need to remember that depending on the period of the moving average, the direction of the trend can change. For example, you use SMA 100, and your friend uses SMA 200 to determine the trend. Suppose that the market is higher than SMA 100, but lower than SMA 200, then you interpret the trend as bullish, while for your friend it is in a bearish phase.

Although opinions are contradictory, both are true. You just mean a short-term trend, and your friend defines a long-term trend.

See also the list of the most reliable brokers .

Although there are three types of moving averages, traders usually use only two types:

In this article we will focus only on the first two types that will help in your trade.

As the name suggests, this is the simplest type of moving average. It is calculated as the arithmetic average of a certain period. A simple moving average smoothes prices and reduces market noise. Therefore, SMA is best suited for long-term trading, not short-term trading.

With a long-term trend determination, SMA with a period of 100 or 200 days usually act as a strong support or resistance .

A trader enters a buy transaction (in an uptrend) whenever the asset returns to the SMA, hoping that the SMA will support the trend.

When the price deviates and is far from the moving average, the trader closes his position, waiting for a pullback. 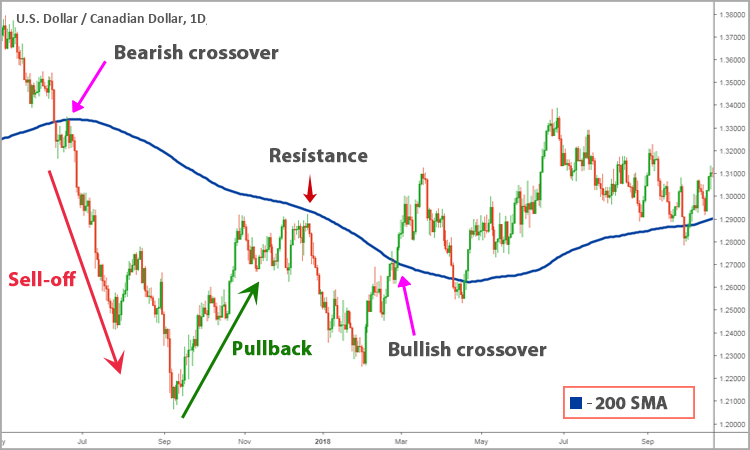 The moving average is calculated as the sum of all prices for a specific period divided by the value of that period. 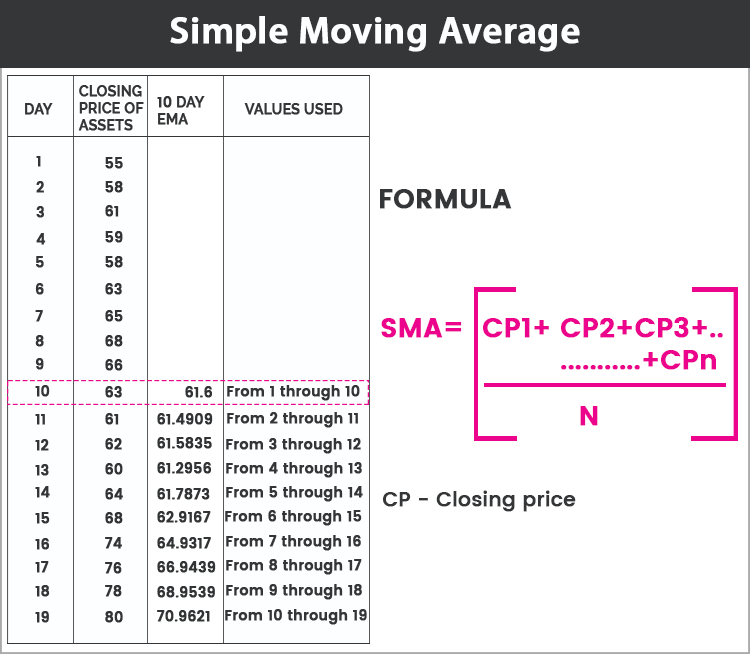 The higher the SMA period, the slower the indicator responds to price changes. It is more suitable for analyzing long-term perspectives than for making short-term trading decisions. In the latter case, he is very late.

See also which brokers offer accounts with a minimum spread .

Exponential moving average accurately determines the short-term trend in the market, but is not suitable for determining the long-term trend. EMA 8 and 21 are widely used to determine the momentum of an asset.

EMA trading strategy is similar to SMA. A trader buys an asset when the price crosses the exponential moving average from bottom to top, and closes when the gap between the moving average and the price widens. For sales, everything is the same. 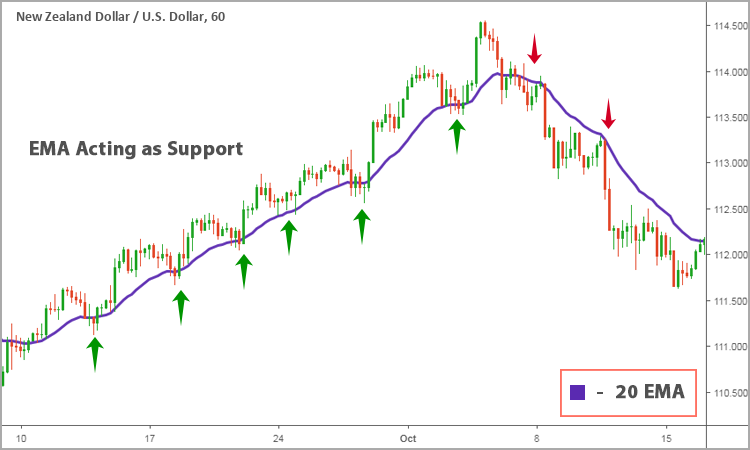 In the chart above, EMA 20 acts as a support level. Each touch of the moving average price is a signal to open a buy transaction and confirmation of an uptrend. After the price breaks the EMA 20 from top to bottom, we can talk about a change in the short-term trend to a downward trend.

To overcome the lagging effect of SMA, you can use an exponential moving average. It is based on a more complex calculation formula, taking into account the latest prices, which makes it more responsive to market changes. 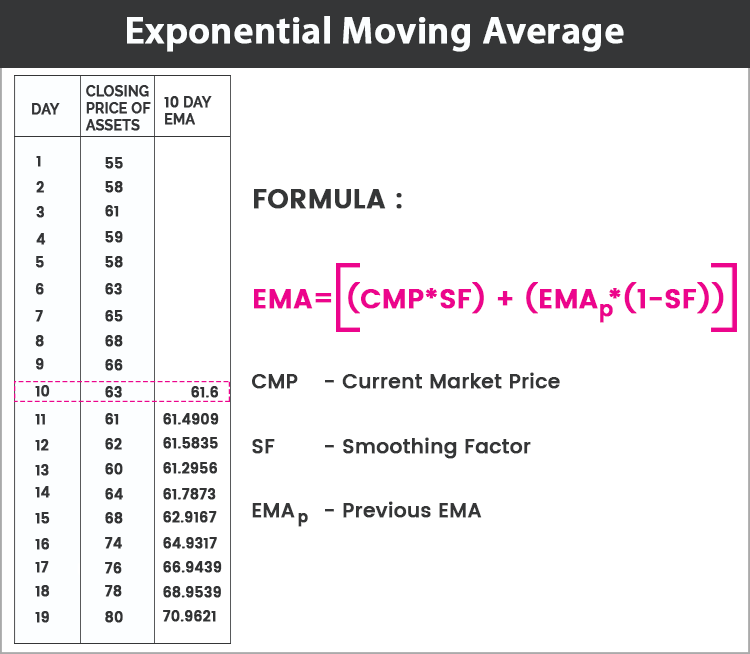 Compared to SMA, latency is reduced by more than 30%. The disadvantage of the EMA is the false breakdown of the moving average.

See also what ECN accounts are and what are ECN brokers .

Above, we looked at possible options for trading at the intersection of price moving averages with different types (SMA and EMA) and periods. We now look at more advanced strategies based on the intersection of 2 moving averages. They can be treated differently. Some traders successfully apply them on Forex, others bypass them, and still others use them in combination with other indicators, for example, to determine the direction of a trend or the end of a correction.

Short-term strategy at the intersection of two moving averages

As a fast moving average, as a rule, EMA is used, and as a slow one, it can be either a long-period EMA or SMA. 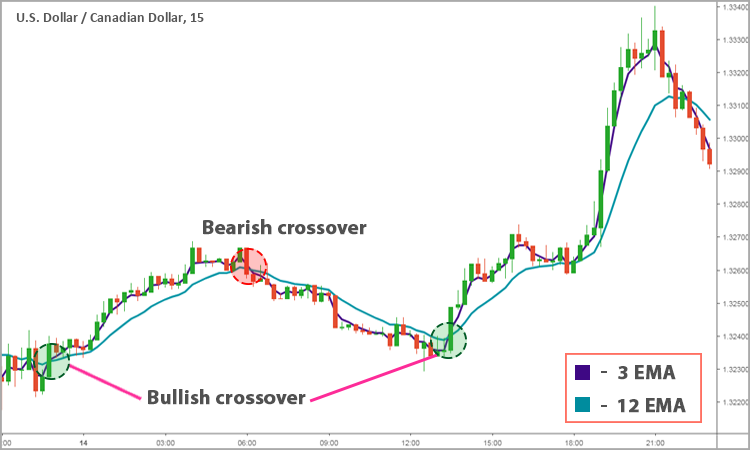 On the 15-minute chart of the USDCAD currency pair, we see how the intersections of the exponential moving averages EMA 3 and EMA 12 give buy and sell signals. The yield on such transactions is small, but the signals appear quite often.

The Golden Cross strategy is a bullish intersection of SMA 50 and other moving averages SMA 100 or SMA 200, after which the price rises sharply upwards.

When there is a bearish intersection of SMA 50 with moving averages SMA 100 or SMA 200, this strategy is called the “Death Cross”, which causes the collapse of the exchangeable currency pair . 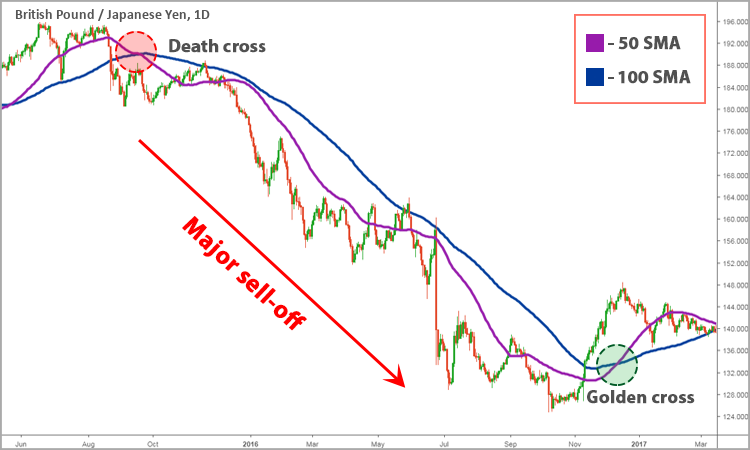 On the chart of the GBPJPY currency pair, the SMA 50 moving average crossed SMA 100 from top to bottom, which caused a sharp drop in assets by 6500 points.

Strategies "Golden Cross" and "Death Cross" are very profitable and accurate, they have almost no false signals, but the deals on them are quite rare.

You can not only use moving averages in your strategy to enter the market, but also to determine market sentiment. The same simple moving averages SMA 100 and SMA 200 are suitable for this. They work effectively not only on high timeframes, but also on 4-hour, hourly and even 15-minute charts.

Consider how to interpret the values ​​of these indicators in practice. For example, if the price is below the SMA 200 moving average, then there is a downward trend in the market, and to reduce the risk of closing deals by Stop-loss , it would be more correct to open deals only for sale.

If the price is above SMA 200, then it is better to consider only buy signals. 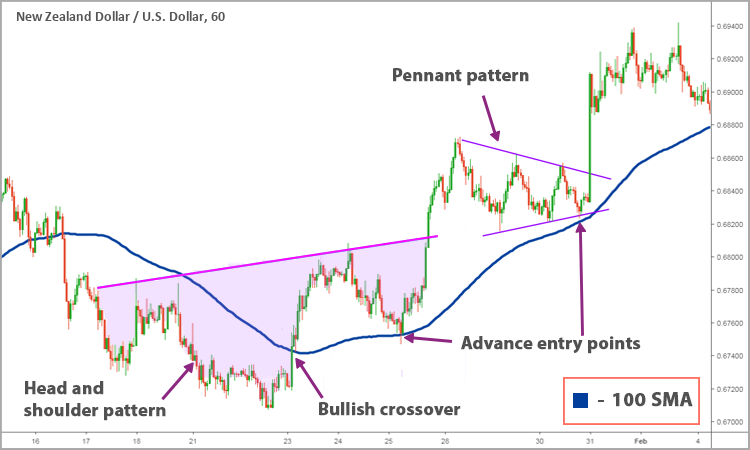 In the chart above, the price forms an inverted “Head and Shoulders” pattern. Since the SMA 100 has already been broken, the trend change is obvious. Therefore, a trader can take the position of a preliminary purchase while the right shoulder is being built. Although it is an aggressive entry, it is supported by a moving average.

Later, the pair consolidated in a narrow range in the shape of a triangle, which is most often a continuation of the trend. Consequently, the trader can hope for a bullish breakthrough on the rebound from the SMA 100.

In addition to the fact that SMA is late, and the EMA often gives false signals, in the absence of a trend, the indicator's effectiveness in the sideways market decreases markedly.

Since the markets most of the time are traded in a limited range, the use of moving averages in its pure form without additional filters can result in large losses for the trader. 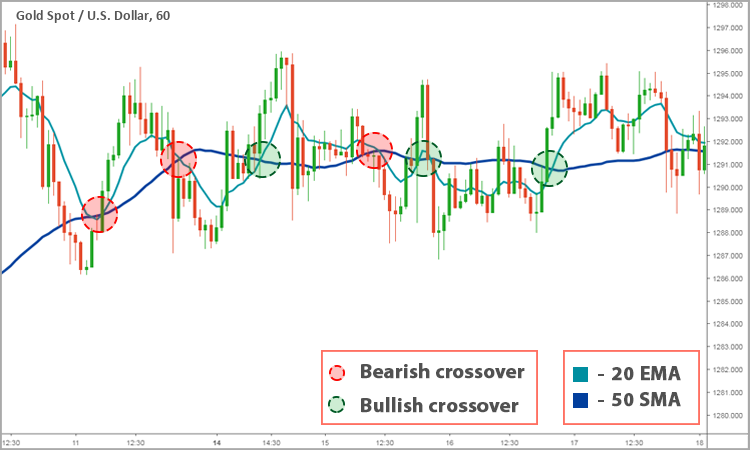 Look at the chart above, a trader using a moving average will have a sad experience, even using two averages. And SMA 50 and EMA 20 do not give impetus to transactions. The price fluctuates just around them.

Overcoming the collapse of the side market can be done using the Bollinger Bands. This is nothing but a moving average along with standard deviations.

Another disadvantage that traders who use moving averages face is that they provide an entry point, but not an exit from a deal. Thus, a trader can hold a deal long enough to see how the price returns to the entry point or miss a good profit, leaving the deal too early.

The moving average indicator is a tool for technical analysis. And technical analysis is more art than exact science. There is no complete guide to how to behave in a given trading situation. It all depends on many factors, including experience. So feel free to experiment and invent new interpretations and theories.

There are countless combinations of SMA and EMA that you can use for free to develop new strategies . However, the side market is a threat that you need to either overcome or evade it with additional filters.

In addition, a moving average with a period of 100 or 200 itself can become a filter in your trading system, limiting transactions against the trend. Use the moving average wisely and let it bring you many lucrative deals!

Read also the article “How to trade on a Price Action strategy?” .