What are smart contracts?

Smart contracts are a piece of software written on the blockchain. Think of it as a digital agreement in which two or more parties write down agreements with terms. All parties can view the contract, but it is not possible to change the contract. It is not necessary for the parties to trust each other, since they can rely on the contract and the underlying blockchain technology. With smart contracts, third parties such as a notary or a lawyer are no longer needed.

Looking for a reliable exchange for trading cryptocurrencies? We recommend Binance – the best cryptocurrency exchange in the world with liquid assets and favorable prices.

What are smart contracts?

A smart contract is not much different from a regular contract. Just as you draw up a contract on paper and register it with a notary, you can also do it online. The only difference is that there is no longer a need for a notary or a lawyer, since the program code has taken over this task. Thus, smart contracts are programmed contracts in which all agreements are already laid down.

Both parties who enter into a contract with each other can always review these agreements. However, it is impossible to change the contract after it has been recorded in the blockchain. This forces both parties to comply with the contract.

When did smart contracts appear?

In 1996, Nick Szabo, a scientist in the field of computer science and cryptography, first described the concept of smart contracts. He talked about making agreements by developing e-commerce protocols between strangers on the Internet. Although the idea already existed in 1996, nothing was done with it until 2009. Then Bitcoin appeared with its own blockchain, and then Ethereum. It was the most suitable platform for creating smart contracts.

How do smart contracts work?

We can compare smart contracts with a vending machine. You drop a coin and get a coffee or a can of Coca-Cola without the participation of the seller. Smart contracts work about the same way. You use a certain amount of cryptocurrency and place it in a smart contract. At the same time, you prescribe the terms of the transaction. This can be, for example, buying a house or issuing a driver's license.

All related rules and agreements are fixed in the contract. For example, if you do not comply with the contract, you will be fined. That's what makes the contract so smart – a third party is no longer needed. 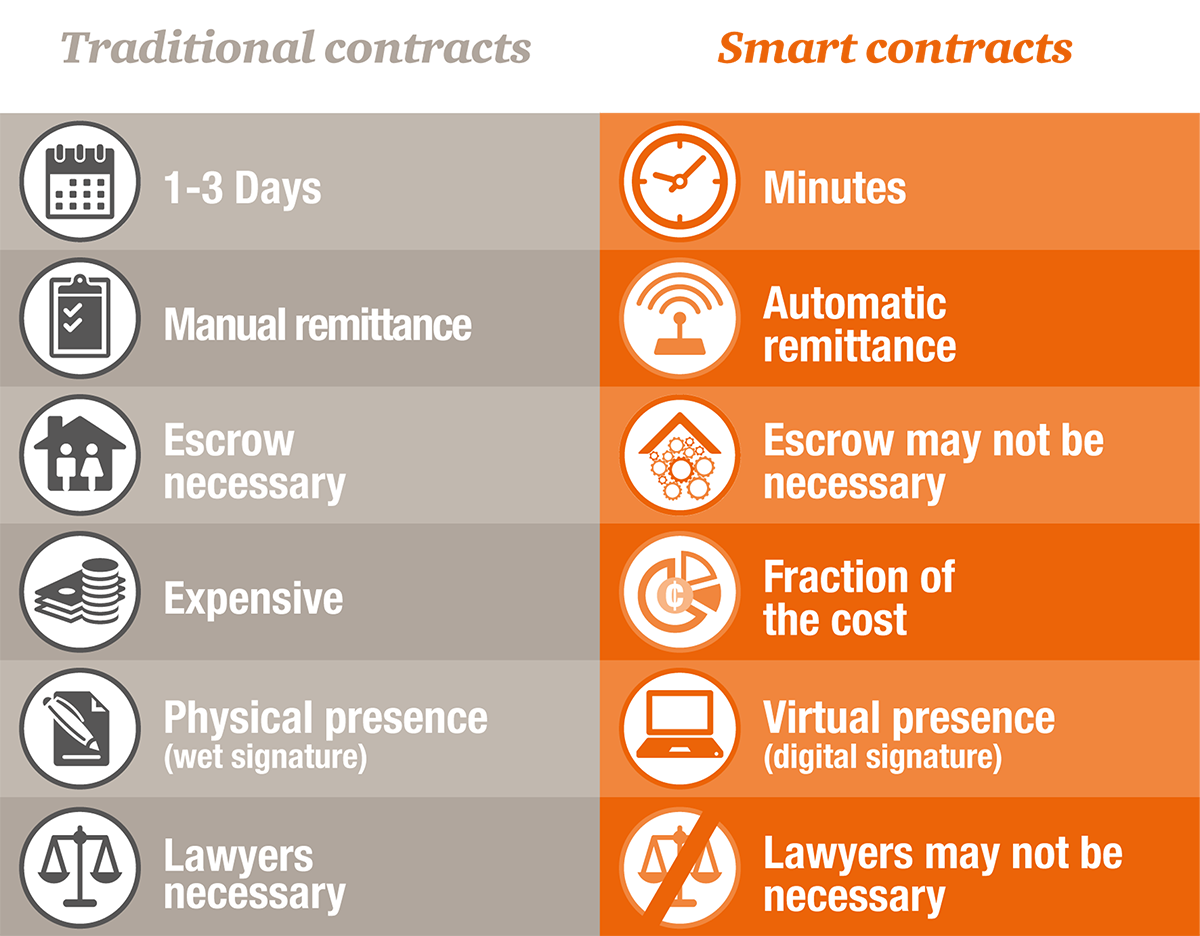 Smart contracts have great advantages. First of all, it is a blockchain network that is automatically controlled by all devices connected to it. All devices have a copy of the information about smart contracts, so no one can change or forge them.

A smart contract cannot be manipulated and you don’t have to worry about the other party trying to break the contract. After all, agreements are not fulfilled by people, but by an agreement. The contract is cryptographically secure, making it impossible to hack.

In addition, these contracts are fully automated. Actions that would otherwise require a lot of bureaucracy or paperwork are now completed in a matter of seconds. However, developers continue to work on improving smart contracts so that these transactions are processed even faster.

Eventually, smart contracts should become much cheaper than traditional contracts. There is no longer a need for a third party with a high hourly wage. Thus, notary and lawyer fees are unnecessary. In addition, the execution of smart contracts is guaranteed by the blockchain, and you will no longer suffer from human errors.

Smart contracts do not allow for unforeseen factors, such as a natural disaster. Blockchain cannot take into account such factors yet.

Another disadvantage may be that contracts cannot be configured. Suppose you want to change the terms of the contract, but this is not possible. In this case, you need to develop a completely new contract. For example, in a lease agreement, it may happen that someone wants to stay longer, and you will have to increase the price and the lease term. This can only be done by drawing up a new contract, under which a new payment must be made and a new key must be issued.

Consider a simple example of a smart contract. Side A wants to buy a house from side B. If Party A transfers the purchase price to Party B, the house is automatically transferred to the name of Party A. The transfer is stored in the blockchain forever. Of course, buying a house is more than that, but it gives you an idea of how a smart contract works.

Let's look at another example. Let's say you want to rent an apartment in Barcelona for a certain period to enjoy the sun, sea and beach. You agree to pay with cryptocurrency. A smart contract is drawn up containing the agreed terms. Both parties can view and verify (but not modify) the smart contract. If you transfer money, the contract guarantees that you will receive a digital key that gives access to the apartment. If you don't pay or pay too late, you won't get the key. After payment and receipt of the key, it will be confirmed that you can enter the apartment within the agreed time frame. After that, both parties are informed that the contract has expired. This contract contains several conditions and several results.

Thus, if you need a contract (a loan, a driver's license, a document on the purchase of a house), and you do not want to use an intermediary for this (a lawyer or a real estate agent), then you can use a smart contract.

Read also the article "What is DeFi?".