Hello gentlemen traders! Today we begin a series of articles dedicated to the training of Price Action. This is a universal trading system that is actively used by both new Forex trading and professional traders. Price Action does not use technical indicators, which means there are no delayed or redrawing signals. Trade is carried out on a clean schedule, where there is only the price. We will enter the deals by Price Action patterns - candlestick patterns, as well as by support levels / resistance and trend lines . Analysis on the Price Action trading system is no more than 15 minutes per day. This is another great advantage in favor of this strategy. You can safely work and go about your business without worrying about your position in the market. It is enough to open a trading terminal twice a day - at any time convenient for you, for example, in the morning and in the evening. Price Action is a time-tested trading system, it has been consistently making a profit for several decades.

If you have not yet found a broker for trading on Forex, we recommend that you look at our brokers rating . Following the link, you will find detailed descriptions of brokerage companies, their trading conditions, as well as feedback from traders.

Type of trade - medium and long-term

Trading time - around the clock

Price Action translates as "price movement." Proponents of technical analysis believe that the price takes into account everything that happens on the market. Therefore, indicators and advisers are not needed, since they are calculated based on historical price data and can be very late. By the time the indicator signal triggers, the price direction may already have changed. Those indicators that are trying to predict the price direction are often redrawn. All this leads to unnecessary losses.

Fundamental analysis works very well in Forex, but only very few use it in practice. To effectively use of fundamental analysis you need to be completely aware of the market situation, read analytics and financial news daily. It takes a lot of time, and there are no guarantees that your predictions will come true. If you do not have relatives in the US Federal Reserve, and you are not the head of a large investment fund, the chances for a successful forecast of price movements are noticeably reduced.

With Price Action, you don’t have to waste time viewing economic news or delve into the complex construction of graphical figures of technical analysis. All that is required of you is to spend 15-30 minutes a day searching for new signals and monitoring open deals. The price action trading system uses candlestick patterns, also called patterns and setups. Candlestick patterns usually consist of one, two, or several candles that can often be found on a chart. They can be reversal or trend.

But you shouldn’t take all signals from Price Action patterns, but only those that have support in the form of support / resistance levels or trend lines. In this case, the efficiency will be more than 90% of profitable transactions. It is recommended to trade with the Price Action strategy on a daily timeframe or 4-hour, but not less, because on small timeframes signal accuracy is reduced.

See also which Forex brokers are the most reliable.

Price Action indicatorless trading system is very popular among traders due to its simplicity, fast learner and good profit. The success of the Price Action strategy lies in the price patterns and the psychology of traders. This is expressed in the form of common candlestick patterns and psychological levels of support / resistance, from which price often rebounds. Understanding these two key points will give you an edge in the market. We offer you a step-by-step three-step price action trading guide.

Consider the definition of support / resistance levels on the example of the USDCHF currency pair (daily timeframe). This is how the net chart of this currency pair looks like: 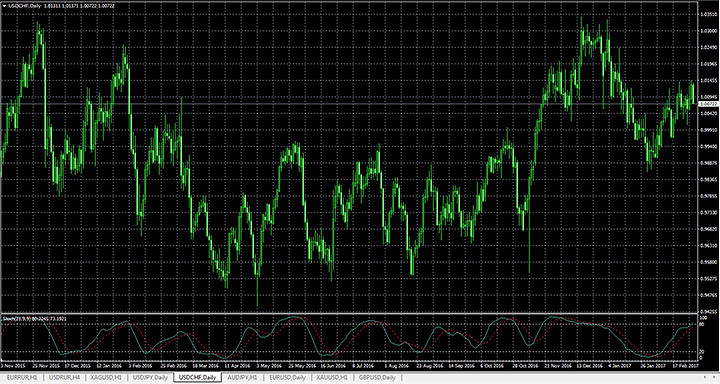 Let's draw horizontal lines through the highs and lows of the price, that is, in those places where there was a price reversal, a correction or a stop of movement. The more often the price tests these levels, the stronger they will be, but not less than two times. Optional levels should relate to prices with an accuracy of 1 point. It should be understood that the support / resistance levels are not lines, but zones, therefore they are often marked on the chart with rectangles. But we will draw them with horizontal lines: 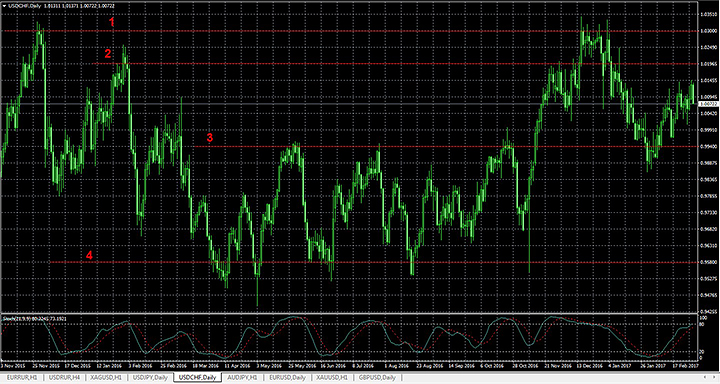 You should also not mark all the levels on the chart, 4-5 of the strongest horizontal levels are enough, which immediately catch your eye, otherwise you will simply get confused. If the price is above the level, then it is called the level of support, and if lower - the level of resistance. Read more about support / resistance levels here.

See also the advantages of trading through ECN brokers .

After you have identified strong support / resistance levels, you must go on to look for Price Action patterns near these levels. There are a large number of patterns, but we consider only the most popular ones:

1. DBLHC (Double Bar Low Higher Close). This Price Action pattern consists of two bars, the lows or highs of which are on the same level. There are two varieties of this candlestick pattern - bull and bear. In the bull model, the lows of both candles are at the same level, but the maximum of the second candle must be much higher than the previous candle. A trade is entered when the maximum of the second candle is broken through, while the stop loss is placed at the lows of both candles. 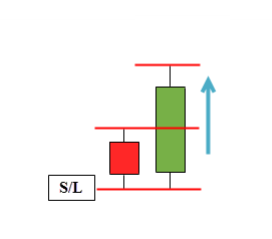 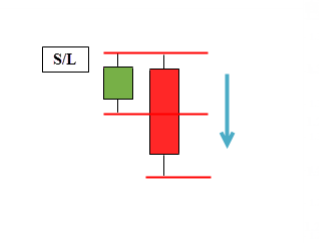 The screenshot below shows an example of a bovine DBLHC pattern on a real chart: 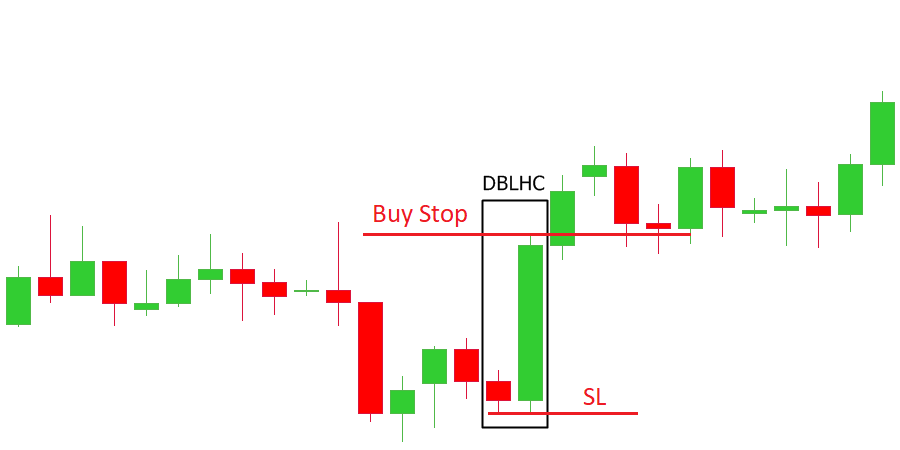 And here’s an example of the DBLHC bear pattern: 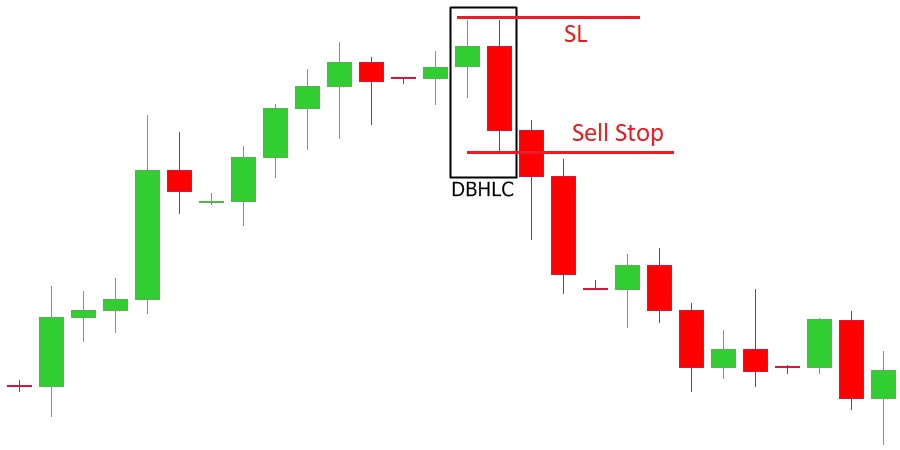 2. TBH (Two Bars High) and TBL (Two Bars Low). These are two-way Price Action models, meaning they work in both directions regardless of the trend direction. In the TBH pattern, the maxima are at the same level, but unlike the bearish pattern DBLHC, the second candlestick is lower than the first one. The deal is opened when the price breaks through the maximum (continuation of the trend) or the low of the second candle (reversal of the trend), and the stop-loss is placed behind its opposite extremum. 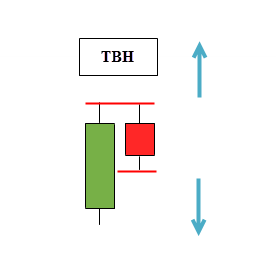 Example of a transaction using the TBH pattern: 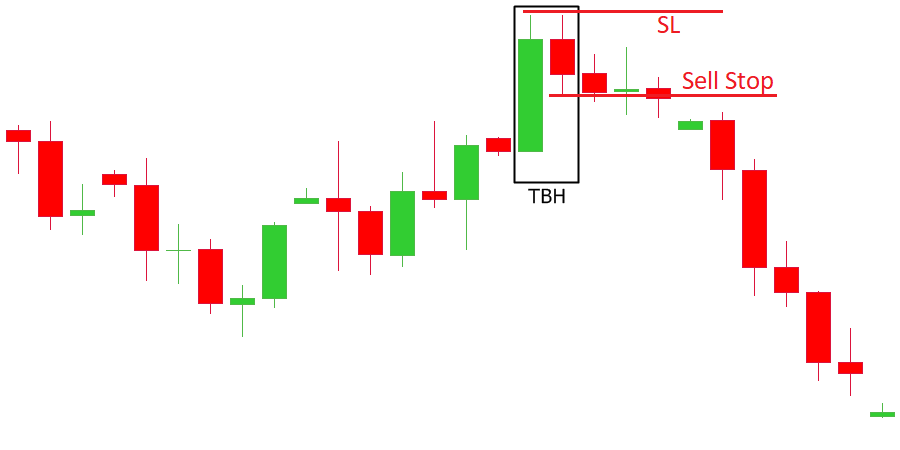 The TBL pattern has its lows at the same level, but unlike the bovine DBLHC pattern, the second candlestick is lower than the first. The deal is opened when the price breaks through the maximum (trend reversal) or the low of the second candlestick (continuation of the trend), and the stop-loss is placed behind its opposite extremum. 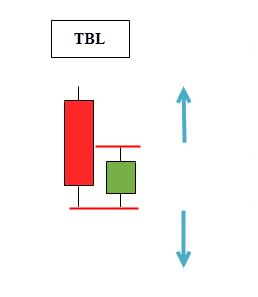 3. Rails. This is a reversal pattern of Price Action. It consists of two candles of approximately the same size, but in different directions. For a bearish pattern, the first candle is pointing up, and the second is down. The greater the length of the candle, the stronger the signal. A deal to sell is opened when the price crosses the minimum value of this pattern, while the stop loss is placed above its maximum. 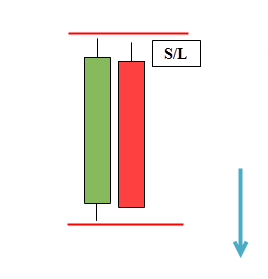 Below is a screenshot of the Bear Rails pattern. 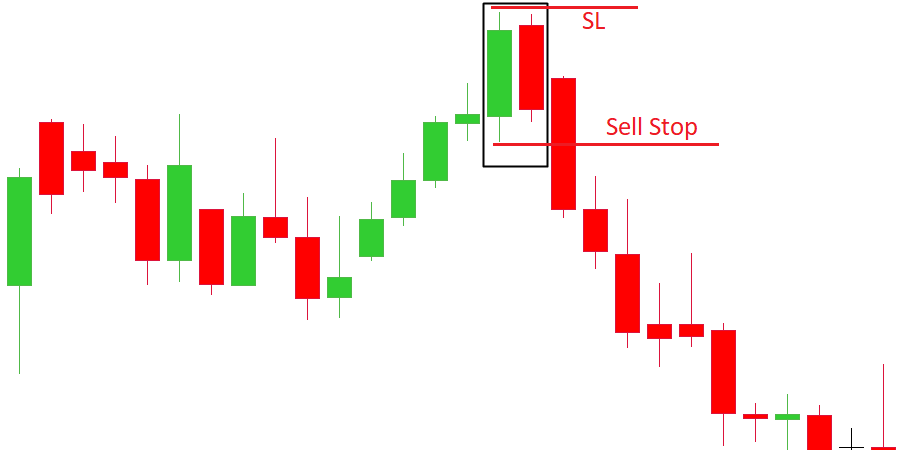 For the Bull pattern Rails, everything is mirrored. 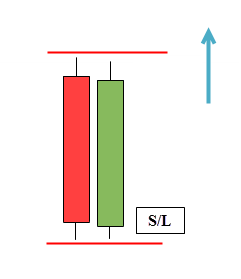 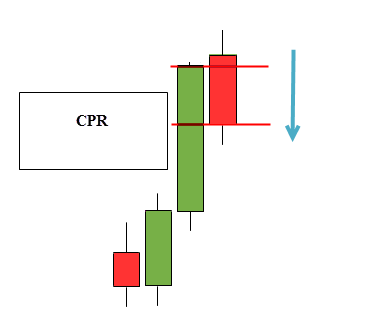 For a purchase transaction, it is necessary that the second candle (bull) opens below the closing price of the first candle (bear). 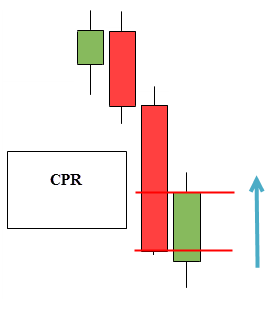 5. IB (Inside Bar). The “Inner Bar” pattern also consists of two candles: the first has a large body, and the second has a small body, it is like inside the first candlestick, hence the name of the Price Action setup. For the Inside Bar bull pattern we have a big bear candle and a small bull candle. 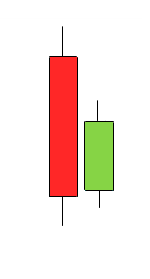 The Inside Bar bear pattern is represented by a large bull candle and a small bear candle.

Shadows of the inner bar can extend beyond the first candlestick, but the ideal option is when both the body and the shadows of the candle are inside the first bar, such signals are more reliable. In addition, inside the first bar there can be not one, but several candles, the main thing is that they all satisfy the rules of the Price Action trading system. In this case, the pattern is assigned a number, depending on the number of internal bars, for example, IB2, IB3, etc. 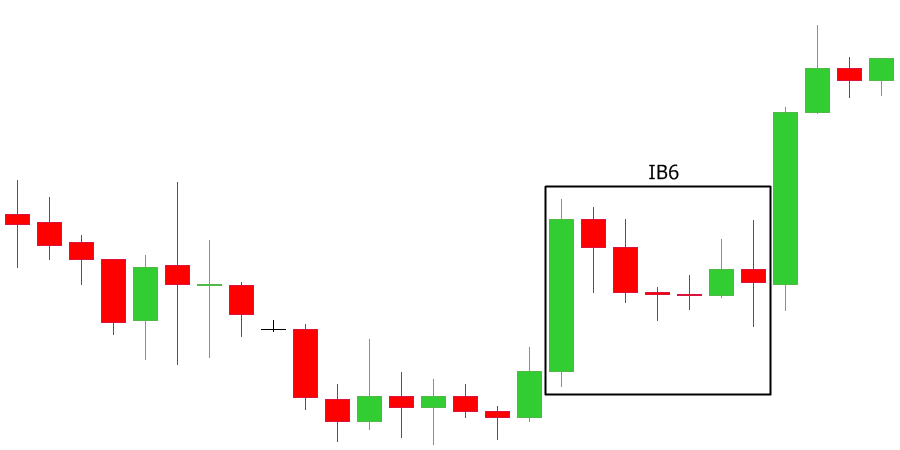 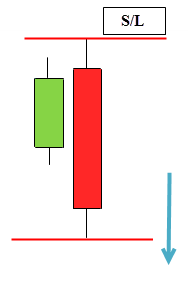 A bullish absorption model is represented by a small bearish candle and a large bullish candle. 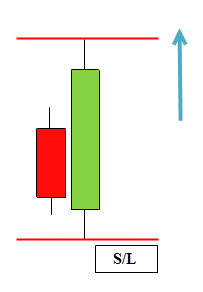 The BUOVB pattern, like the Inside Bar, can consist of several candles. In this case, the last signal candle absorbs several small bars. The more candles were absorbed, the stronger the signal. 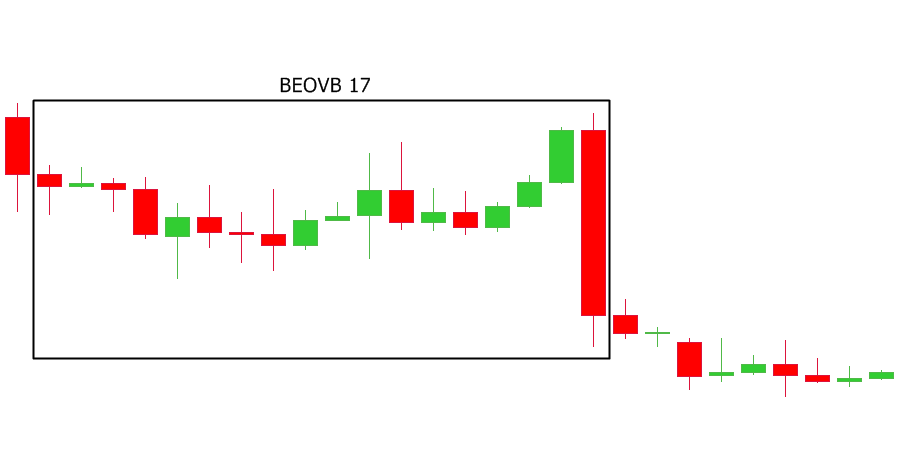 7. Pin Bar. This is the most powerful and very common pattern of Price Action. It represents one candle with a small body and a long shadow on one side. The buy signal is a pin bar with a lower long shadow. The deal should be opened with a Buy Stop pending order to break through the pin bar's High point, and a stop loss - at the lowest Low point. 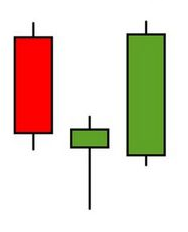 The sell signal is a pin bar with a top long shadow. The deal should be opened with a pending Sell Stop order to break through the Low Point of the Pin Bar, and the stop loss should be opened at the top High point. Pin-bar body color does not matter.

See also, what are brokers with bonuses to deposit.

It should be remembered that Price Action is a medium-term strategy, and trading is conducted on a daily timeframe, therefore, goals must be appropriate. If you exit the transaction too early, then miss the opportunity to earn big profits. But if to tighten with an exit from the transaction, then instead of profit it is also possible to receive losses. The best option to set a take profit is the nearest level of support or resistance, that is, a place where the price can turn around. Take profit must be placed a few points to the horizontal level. You can also close the transaction in parts. Reaching the first level, close half of the transaction and move it to breakeven, and at the next level, record the remaining volume of the transaction.

Do not forget about the stop loss , this is an important component of any trading system. It is usually placed behind the minimum or maximum of the pattern, as well as the horizontal level. Remember that the size of the take profit should be 2-3 times the stop loss. If this condition is not met, then it is better to skip such a deal.

Price Action is a profitable, indicator-free trading system, tested by time. With its help, you can start to make money confidently on Forex. At first, it may seem difficult to determine support / resistance levels and search for Price Action patterns on a chart. But after some time, you will learn how to trade according to this strategy, and it will take you no more than 30 minutes a day to analyze the market. Bookmark our article and return to it every time you have doubts about the correctness of the pattern. And do this until you memorize all the Price Action patterns. In the following articles we will introduce you to other features of the Price Action strategy, thanks to which you will become an experienced trader.

Read also the article “What are CFD contracts” .